Junior Eurovision 2014 is becoming more and more of a distant memory, but the team from San Marino is determined to keep it alive. Along with sending member Anita Simoncini to Eurovision 2015 in Vienna, the Peppermints have (finally) released the official video for “Breaking My Heart”, their Junior Eurovision song.

The Peppermints released a more casual video prior to the contest, given that they only met for rehearsals and had limited time to shoot promotional footage. In a previous interview, they hinted to us that they would film a more official video, and we’re glad to see it!

This clip shows Anita, Sara, Greta, Raffaella, and Arianna strolling the streets in Italy, riding vespas, and having fun in front of a castle. We are glad to see that the girls are still making great memories together. Anita is right: the Peppermints are far from over! 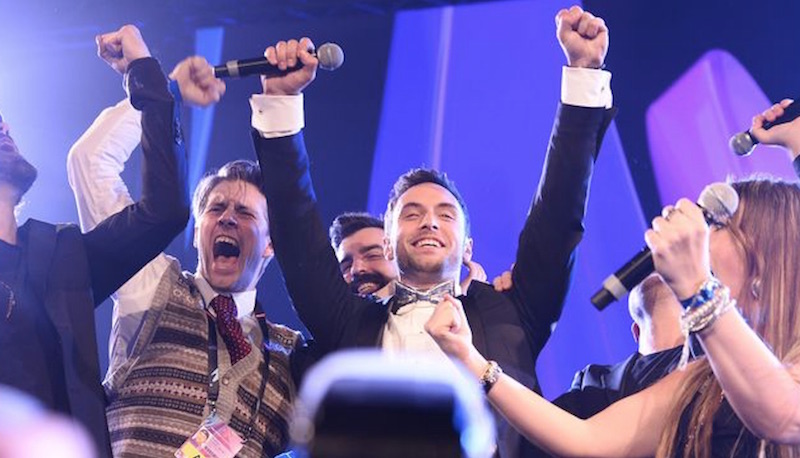 No wonder if San Marino send The Pepermints in Eurovision 2016. They are amazing!

They were probably my second favourite in the entire JESC 2014, great to see a video from them 🙂

“Breaking My Heart” was actually one of my favourite songs in JESC 2014. I have no idea why but it was probably around my 4th or 5th favourite by the end of the JESC 2014 season. The video kinda seems like a homemade commercial for some Italian vespa store featuring the owner’s daughter and her friends though lol. I wish San Marino’s entry in ESC this year was something more fun and upbeat like this and their 2013 JESC entry (although I hated that one).

Anita is the headbitch of the peppermints 🙂 #kidding

*Chain Of Light* is not bad song at all…The remix of it is even much better…If only Michele & Anita could sing this version in Vienna instead…Then San Marino would be qualifier 4 me… I really dunno if they can pass to the final as the level & the competition on their semifinal is harder than the 1st one.. San Marino goes to Vienna as an outsider objectively.. I have it 10th from the 17 entries on the 2nd semifinal and in my top 25.. The lyric of their song **Lets Illuminate The Night** has really stuck on my mind..… Read more »

Mario ~Keep The Gay Vision Alive ~ A Heart Can Not Broken When It Was Never A Whole..

Ok to admit, this song was underrated in Malta…It was one of the good songs of the Junior Euro Contest Vision 4 me & i expected San Marino to do better in the voting though.. The fact that San Marino was the only country that did not awarded any points to the 2nd runner up entry of Bulgaria was really lame & unfortunate…Especially when all {except one that gave 4 points..} the other countries gave really high points to the bulgarian song… So typical behaviour of my ”beloved” san marinese jury….:P That gave zero none points to the victorious champion… Read more »

Never liked their song, they were one of my least favourites of JESC 2014. Maybe that’s why I actually like Chain of Lights, compared to Breaking my Heart in 2013 and Sole Intorno A Me (which was also one of my least favourites in 2013) Chain of Lights sounds like is a masterpiece! Both Anita and Michele sound so much better now than in their respective JESC entries.