Three months ago, husband-and-wife duo Maraaya got down, down low in Vienna. Finishing in fourteenth place (Slovenia’s best placing since 2011) has seen the duo’s domestic profile get even bigger. Yesterday they announced on Facebook that Marjetka — she of bejewelled headphone fame — will join the judging panel of Slovenija ima talent, the country’s adaption of Got Talent. Our girl Marjetka will join Branko Cakarmis, Ana Klasnja, and Lado Bizovicar in choosing which act will claim national fame next.

“When it comes to talent, I look wider than just a few minutes of a stage performance. It is a lot of effort, work, dedication and willpower. The sentence ‘I can’t’ should not be in his or her vocabulary if he or she wants to win.”

In four seasons of the show, only singers have been able to grab the trophy. Last year’s winner was Jana Sustersic, who competed against Marjetka and Maraaya in EMA last year.

She joins the ranks of other Eurovision-stars-turned-judges, including Edurne, Anggun, Nina Zilli, Charlotte Perrelli, and DJ Bobo, all of whom have judged their own country’s Got Talent at some point. We’re confident that Marjetka will slay! Sweden: Loreen performs “I’m In It With You” live at Sommarkysset 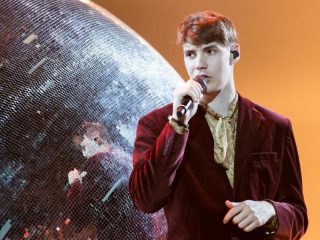 @ Hey Padraig…Actually if i knew that you guys would post Maraaya’s facebook post i would not have put my tag there though.. When i clicked on the article here today {yesterday i couldn’t come on WB 4 a reason..} I was really surprised to see that this tag of mine on their fb page was visible here! 🙂 And now i have become famous 😛 hehe Maraaya have their posts/photios open 4 tags…Anyone can put their name tags if they want to.. I had put my tag to other old photos of Maraaya previously 4 the record.. Well sometimes… Read more »

@Mario of Gay Vision – why have you tagged yourself in Maraaya’s Facebook announcement?