After a relatively quiet weekend, Spain kicked national final season back into gear last night. Following 2015’s misstep, the country returned to its Objetivo Eurovisíon format and decided to send Barei to Eurovision 2016 with “Say Yay”. She joins the five other confirmed entries from Albania, Belarus, Belgium, Ireland and Malta.

In the past three weeks y’all have cast more than 8,600 votes in our weekly favourite act polls. Once again, it’s time to wipe the slate clean and ask you to choose your favourite Eurovision 2016 act so far. You can listen to the Spanish entry and watch our video reaction below. Then vote in our poll. You can vote for as many contestants as you like, but you can only vote ONE time. Be sure to check the box next to every act you want to support before submitting your votes. Voting ends on Thursday 11 February — just ahead of the Austrian national final on 12 February.

We will then relaunch the poll to include all the entries that drop that weekend — the aforementioned Austria along with Denmark, Switzerland and potentially Italy on 13 February and Georgia on 15 February. That means this poll will remain open for almost two weeks. However, we may close the poll sooner if we get any surprise entries in the interim.

Spain’s Objetivo Eurovisión saw six acts battle it out for the chance to sing in Stockholm next May. The line-up included heavy-hitters such as Junior Eurovision 2004 winner María Isabel and Your Face Sounds Familiar veteran Xuso Jones. However, the unsigned Barei rose to the top with “Say Yay!”. The upbeat pop number already has us dancing, but will it be enough to see her revive Spain’s Eurovision fortunes?

The poll is now closed. See the results. 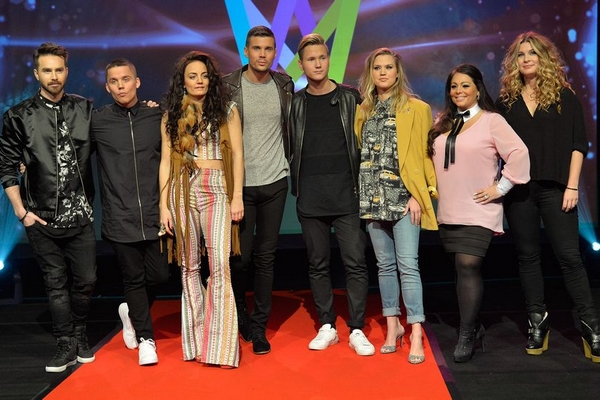 Melodifestivalen 2016: Which act from semi final one are you most excited for?

My favorite so far:

I’m from Mexico and I’m not voting for Spain as my number one because she’s Spanish, but because the song makes me want to dance and the song is catchy. At first I didn’t like it as much but now i haven’t stopped playing it. As for Ireland I loved the rythm. It makes me feel happy and obviously it’s a song I’m loooking forward to see on stage. Good luck to all. 🙂

Westlife fans from all over the world are sharing the poll. The poll isn’t being hacked so don’t blame us (or the Irish). Barei and the rest of them need to get international!

I don’t have a clear favorite right now but I love Albania, Malta and Spain 😀

Say Yay is amazing, I was over the moon when she won. Does anyone know why she ditched the Spanish lyrics in the second chorus? 🙁

Ireland few hours ago was second behind Spain.

This article is not even in frist page of wiwibloggs, it’s quite odd that now Ireland sunddenly got so many votes.

Can the team check if there’s one person voting hundreds of times?

At the moment Albania comes in 5th in my own ranking, but I feel like the bones are there for something good.

Laura’s entry has issues, but it’s fun. Bring some of that Love Kills rejig magic and it could work. I don’t think rejogs are the solution to everything, but the song is close enough that there’s a shot.

Even I’m from Spain, there’s no other type of poll you can use Wiwibloggs??
Seems so fake the % for Spain are Ireland comparing to the others…

@Rona’s Hair – I think that several Finnish songs would top this poll in my eyes in a blink – No Fear, Good Enough, On It Goes, Love is Blind, Don’t Wake Me Up, Draamaa, Shamppanjavaitas. Finns have a great line-up, they just have to not screw-it-up like last year and pick something good, catchy and special.

Spain looks good but the song has not hooked me. Maybe it’s a grower.

Barei and Ira top Ireland in a instant! Let the Irish create a reality where Nicky is the winner. Also, idk if its just me, but Saara Aalto could beat all of these people.

Looks like according to this poll, I’m in the minority. My top 3 so far is 1. Malta
2. Albania and 3. Belarus. Spain’s song is fine and I think it is better than Ireland’s or Belgium’s.

Oh yeah! 😀 I knew that Spain will have a better chance in the competence. Good luck Spain and I will support you!

I adore Spain
Really lile Belgium
I like Belarus and Ireland
Albania will be revamped
Malta is such a snooze fest I just can’t.

To all the supporter of Irish singer all over the world.. Please vote @NickyByrne of Ireland in eurovision 2016… I guess in my opinion his the best singer to all the qualifying… And I’m her no.1 fans her in the Philippines…

Lol @ people (irish or otherwise) claiming the spanish over hype their entries and hijack the polls. I think a good thorough look in the mirror is in order. You can start rightfully complaining about spanish spammers the day Cann Lin and Molly Sterling reach a final 😉
Anyway, my top
1) Spain (dissapointed it’s in english, but still a good song nonetheless)
2) Belgium
3) Belarus
4) Albania
5) Ireland
6) Malta

Spain is the best. No doubt about it is a diamond in the rough. The song is lively, contemporary and catchy. The singer is a great vocalist with a ery authentic vibe. If Spain revamps it and plans out an efective stage act, they should do well. Albania is another song with great potential. Malta’s song and singer lack authenticity. Belarus is too raw for my taste. Ireland’s song goes nowhere. Belgium is a mess.

Shane, there’s 6 countries participating so far so it’s very unlikely that somebody’s country wont be doing well because the entry hasn’t been selected. Also, Ireland has a suspiciously high amount of votes. If you compare it to forums like Escfoum and escunited, it is hardly doing aswell and is worse than Malta and Albania. The thing is with a poll like this, anyone can vote and so somebody can just spam their votes for one artist. Whereas, on a forum, you need to sign up and then vote. Also, forum voting allows you to vote on all the songs… Read more »

Albania one and only that deserves the 1st place right now.
I like a bit Spain though.
@MGR what exactly do u mean “Albania is only Albania” in ur case ??

I completely Agree with Sophia, please stop being so harsh on Ireland too, it’s better than the other songs! You guys are saying oh stop voting for ireland it’s not fair. I’m not from Ireland but, I like the song. You guys are only raging becuase your country is not winning the country that gets the most on this is favourited.
Btw, Malta is so overrated
My top 3:

Malta is extremely overrated nothing special about it

“Say Yay” is loose and lax song. It’s hard to say one good word about yesterday’s venture in Spain.

Albania is only Albania, but Spain is Spain and that’s why it hurts. I thought that this country is civilized and modern.

I put the Spanish entry to my first place. Barei really could win it all in Stockholm, but… The song really needs to be revamped. They really should work on it a lot, with cool producers. “Say Yay” is more original than “Amanecer” or “Dancing in the Rain”, but both songs were way better-produced than the song of Barei, especially Ruth’s. I’m pretty sure RTVE will have enough time to work on the song, as well careography and what she wears. All these stuff really should be revamped – also it’s better if backing vocalists and Barei herself don’t scream… Read more »

I think my top may change a few times but right now its;

I hope that you know that all my previous comments (excluding this one when I said that she looks like Ann Sophie, because this is true) were clear irony. This is my ranking at this moment:
6. Albania – very raw and weak
5. Spain – ESC is not about foot dancing
4. Ireland – too strength
3. Belarus – it’s hard to believe
2. Belgium – I like the Belgian selections because generally the best song won
1. Malta – even bookies believe in Ira Losco

These polls are right until spanish act can be voted too and spaniards get crazy voting their own bid. Every year is the same with them.

As I’m Spanish my favourite right now is Barei, maybe it will change with coming artists.
About the others:
2. Belarus
3. Malta
4. Albania
5. Ireland
6. Belgium

Spain is above the others! Say Yay! <3

pole, it’s really consistent with the Spanish though, every year their entry gets some special treatment and most of the time it turns out to flop. 2012 is the only anomaly as a bad song actually managed to do well.

The mass voting is quite annoying. As an Irish person, I would much rather see how we genuinely rank in comparison to the other contestants than see us pointlessly topping to polls week in week out.

Looks like Spain’s copying Georgia this year in the polls…

Still can’t believe we have nearly a month until the deadline and no good entries yet.

Thanks to whoever’s spamming the poll for Ireland

No song that I really like too much yet.

None of the others stand out enough to rank. I really like Malta’s song but otherwise I think the songs so far are not very good.

My top 6: 1. Spain 2. Ireland 3. Malta 4. Belarus 5. Belgium 6. Albania To be honest only Spain and Ireland are my favourites so far, I don’t really see the others qualifying. But Spain is definitely top 10 worthy and one of my favourite Spanish entries. Ireland is my second favourite, it is a good solid, yet predictable pop song. I really don’t get why people are ranking it so low, yet some of the same people ranking it low had Mans as there number one last year….guess that’s just because it’s Ireland. Malta is also good but… Read more »