Turn up. Turn out. It’s a simple rule that celebrities from L.A. to London follow throughout awards show season. And tonight as the Eurovision 2017 stars prepare to throw down inside Madrid’s Sala La Riviera for the Eurovision Spain Pre-Party, they are doing their best to live up to their idols — and prove they have what it takes to succeed as an international superstar after the Eurovision glory fades.

Wiwibloggers Bernardo, Jacob, Jordi and Luis are working social media as the stars werk the red carpet, and we’re updating our Twitter and Instagram accounts non-stop. Luis has been busy cat-calling at the stars, and they have plenty to say. We’re pasting some highlights below in case you’ve missed them.

The Czech Republic’s Martina Barta was looking totally fresh-faced and radiant as she stepped into the venue.

Always cheerful, she pleaded for support for all the artists. Baby, you got it!

Hovig kept it simple in an on-trend bomber-jacket and some very trendy aviator sunglasses.

He was taking so many selfies we worried he may not make it inside! But he loves to give back to his fans.

Next it’s a lady in red — Alma from France! Serving the L’Oreal cover girl realness, she looked fiery, but reminded us that she’s very sweet.

“Hello wiwibloggs! I’m sending you lots of love. Thank you for your support because I’m reading all the articles every day and I love it!”

Albanian star Lindita was kind enough to call us her favourite people in the world as she sashayed down the carpet.

Working a pure and pristine look, she put her assets on fine display with a VERY plunging neckline.

Her perfectly manicured nails were painted white, and she wore a gold choker to add extra sex appeal.

She’s the newly crowned Queen of Poland and she’s winning fans in and out of the country.

And Kasia Mos reminded us why as she slipped into an off-the-shoulder black top with a shiny skirt that helped light up the runway.

Fresh-faced and radiant, she perked up to send all y’all love despite being bombarded by fans for selfies.

The guys of SunStroke Project bust out into spontaneous song with their fans.

THAT is how you slay!

He’s one of the happiest people at Eurovision 2017, serving non-stop optimism and a can-do attitude that befits his entry “Running on Air”.

The Austrian star cut a casual figure, pairing a white t-shirt with a vintage leather jacket.

He had nothing but love for his Spanish hosts, saying everyone was so kind, and he seemed legitimately touched that so many people know his name. Awww.

@nathantrentmusic is such a nice guy! And he speaks fluent Spanish too ? #eurovisionsongcontest #ESC2017 #espreparty #redcarpet #eurovision #madrid #spain #nathantrent

Don’t call her Tako! Tamara, one of the biggest divas of the year, strutted down the red carpet holding her mobile phone (she’s got to stay connected) and a bottle of water (which explains why her skin always looks so soft and supple).

Ready to rock out she was kind enough to pause and spread some love.

The red carpet was no match for Valentina Monetta, whose flame red hair was the real standout of the evening.

Her singing partner Jimmie Wilson pulled his shirt down low, creating a rather low neckline. As he flexed his pecs we saw some proper décolletage…

Ireland’s Brendan Murray is dying to try — but he looked effortlessly chic as he walked the red carpet in Madrid.

Nodding to the hot summer nights, he wore a breezy white shirt which straddled casual and dressed-up perfectly.

Watch as he kindly poses for photos with the endless throng of fans.

Switzerland’s Miruna made the most of sun-drenched Spain, wearing a low-cut top that showed off her ample assets.

Despite her spilling cleavage all eyes were on her perfect pout and even skin tone, which looked extra matte despite the rising temperatures.

He may be one of the younger acts in this year’s competition, but Kristian Kostov has already developed his own style, working a funky graphic jacket covered in palm frees.

He paired the jacket with a long and flowing black top and some spray-on denim jeans, dancing and jiving all the way up the red carpet.

When they’re angry they don’t yell — they yodel!

And Romania’s Ilinca and Alex Florea did it again on the red carpet. But this time Ilinca — who sizzled in red — performed a special version shouting out to her friends at wiwibloggs.

We love her spontaneity! We also love how Alex contrasted the songstress by wearing all black, adding some much-needed edge and grit to the red carpet. We approve!

And right behind her it’s Robin Bengtsson, showing off more cool cat styling with his suit and white turtle neck.

Two for the price of one! @robinbengtssons and @bogicevic_t are serving it honey! #eurovisionsongcontest #ESC2017 #espreparty #redcarpet #eurovision #madrid #spain

Teen queen Blanche is ready to shine just like her “City Lights”.

She wore a textured velour top which she paired with a pink bottom. 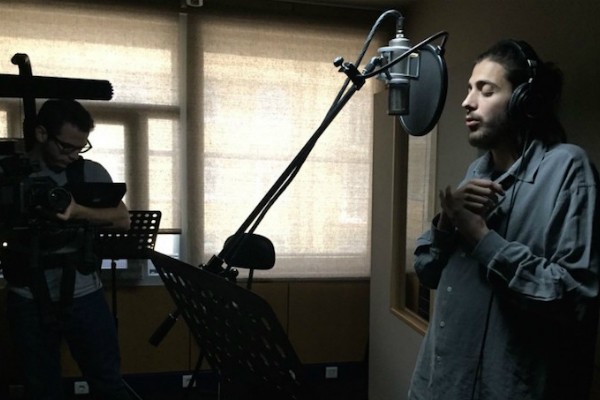 Alma should win eurovision next top model!
Blanche, I’m so proud of my Belgian queen!

Sorry, girls, but Slavko has the best dress. I’m done!

Imri is amazing…. love the outfit!!!!

exactly i agree with all of this what you said :), but Ilinca looks so stunning in red

and Alex is becoming more confident as well with the interviews 🙂

so many stunning looking women this year at eurovision 🙂

So… The Final ESC Version of Levina is out now. It sounds very nice and her beautiful voice is so powerful.
Maybe she will do better than expected?
https://www.youtube.com/watch?v=AufW4F4KBfU

I was so sad not to see some of my favorites here…Norma John, Francesco, DiHaj, and Joci Papai. 🙁 However, Slavko was there! He’s an amazing man and I really liked his interview from Madrid. He’s got an awesome way of life. I’m impressed! Didn’t see Fusedmarc on the red carpet…maybe I missed them but I was glad to see their interview and performance anyway! I love Fusedmarc and I wish them amazing luck in Kiev. They don’t need my luck though because I know they’ll do amazing anyway! 🙂 Cool to see Alma and Ilinca and Alex there! Robin… Read more »

Really I don’t think Alma reads all the articles!!
But if you do read this one please tell us why you wore only black/monochrome on first half of party circuit??
She can make all colors work though.

Spanish people know how to party <3 🙂 Spain would be the ideal country to host the EuroVision Song Contest <3 It has been 48 whole years since the last & only time that Espana was the host country of the ESC,so it's about time for the contest to go to Spain.. Spain is a country with great party atmosphere & vivid night life, its very gay friendly country with lots of gay bars & clubs,hot weather, hot beautiful & sexy men, passionate & warm people, great beaches etc etc.. If Spain wins the EuroVision next year or very soon,… Read more »

ICYMI ‘Rose’ of “Titanic” which was the LAST living person of the 19th century in the world (1800-1899) died/passed away today… Emma Morano was from Italy & she was born on 29 November 1899! May she rest in peace… (The real Rose of Titanic passed away in 2009 in the age of 100 years old..) The last deceased winner of EuroVision which was Jorgen Ingmann (the first Danish winner “Dansevise” Denmark 1963) had passed away back in 2015.. Lys Asia the first winner of EuroVision thankfully is still living.. (But she is now over 93 years old though. Hopefully she… Read more »

Slavko’s outfit is actually amazing, it looks like a vest they’d give you at a five star hotel

Is it me or do Valentina’s and Jimmie’s outfits keep getting more and more ridiculous the closer we get to the actual Eurovision Song Contest? What are they going to wear in Kyiv? Green leather pants, pink bowties and blue tophats?

*ocean
There is no hell or paradise. No afterlife..
So whatever sins/mistakes you have done
in your life.. it really doesn’t matter anyway..
So just live with no regrets…
And just party everyday with not thinking
of tomorrow.. <3

Party like the ship has already struck
the iceberg & is already sinking..
In few hours it will be in the bottom of the icean/sea & you will all be dead.. 😛 hehe..
Party like there is no tomorrow.. <3
We all gonna die anyway
& we only live once in this short life…
https://m.youtube.com/watch?v=NQhGTsTMrVY

Tamara (Georgia) She is Queen

Salvador Sobral will be there. right?

@Leaf: Thus why I voted for them in the Next Top Model poll along with Miruna from Timebelle