She delivered one of the most memorable performances of Eurovision 2017, bringing together chalkboards and a man dressed as a horse.

And it’s been full steam ahead for Azerbaijan’s DiHaj since then with the release of her band’s debut album End of Sunrise in July.

Speaking to wiwibloggs in Baku last month, she dished on the nine-track album, her love of singing in English and, of course, her experiences at Eurovision 2017.

flashback to Eurovision ? we had a nice talk with energetic and funny @wiwibloggs that surprisingly approached me where? in Baku ! ? was happy to see them #2017esc #dihaj

End of Sunrise, co-written with her two bandmates, features only English-language songs.

“It’s not that I decided [that],” she says of the language choice. “For now it comes more naturally to me — singing in English…but I think in the future there are going to be more Azeri songs.”

There’s plenty of more music in the pipeline: “We are going to record two singles at the end of August. We’re going to Berlin and we’re going to choose out of it something.”

When asked when, DiHaj keeps it loose. She doesn’t like to burden herself with marketing details.

“I am a musician,” she says. “I don’t want to think, ‘Now it’s time and I have to release something.’ That is the manager’s tough work. My aim is to write songs. When and where it’s going to be released is not my cup of tea.”

Portugal, the winning country at Eurovision 2017, gave DiHaj twelve points. And the love continued over the summer.

“I have to say they [OGAE Portugal] also invited us to a Eurovision party [in Porto]. It was very nice.”

The mutual respect is evident, as DiHaj has only kind things to say about Salvador Sobral and his winning number “Amar pelos dois.”

“This is a real song with real feelings — very romantic. I don’t mind that he won at all. I’m happy that this year Eurovision had the winner like this. Because he is a great artist with a beautiful voice and attitude. And the song was brilliant.”

Are you loving DiHaj’s laid-back spirit and edgy styling? Do you still listen to her song “Skeletons”? Let us know in the comments box below! 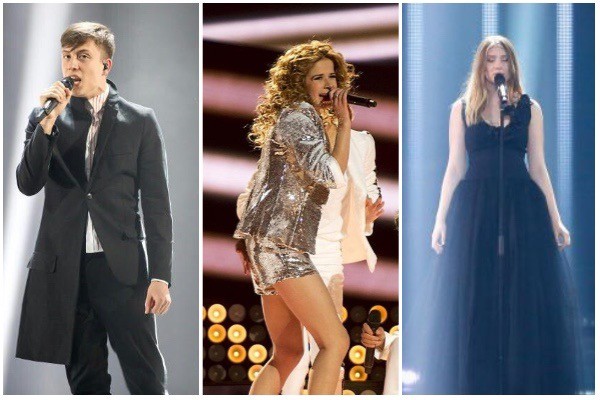 Poll: What is Belgium’s best Eurovision entry since its 2014 elimination? she’s right, it was the BEST SONG

Those who say Amar pelos Dois is rubbish, Skeletons is the real deal and Salvador a snob should look up to what DiHaj has to say

Azerbaijan should send something like Hadise-Dum Tek Tek, and should be 100% local production.

…….erm Dum tuk tek is the worst local production if you would ask from Azerbaijani composers.

I think Azerbaijan is kind of afraid of sending their traditional song, as it sounds very Islamic. It’s called Mougham who may be associated with the anthem of terroristic groups.

Well, it would be a real shame if viewers were to make that unfair and Islamophobic connection based on nothing but a piece of folk music. I have more faith in the European public (despite everything…).

@Steve Excuse me, but your comment is absolute rubbish. They already sent mugham back in 2012 and it was really beautiful. I actually would love to hear more of it.

PS. I think that this type of hateful comments should be deleted.

Sorry if that hurt your feelings. I’m not racist at all. It’s just fuming to see how we all get misled by this country. They provoke war, they bribe ESC. Just look how many views their winner has got in YouTube. Facts speak out for themselves. They try to build an image of a modern country, but secretly support Erdigam. They say they are one nation, two countries. They don’t even respect victims of Paris attacks shouting Allahu Akbar at a football match. I’m sure they gonna award visas for all Turkish citizens if they get associated with the EU.… Read more »

@Steve, or whoever you claim to be you are, Azeris are culturally very secular and a lot of people had gathered with candles around the French embassy in Baku when the Paris attacks happened. You probably mean the Turkish football match which has literally no connection to Azerbaijan. Azerbaijan is one of the best allies of Israel and there is no way for Azerbaijan to support terrorism. In fact, Azerbaijan is one of the victims of terror attacks mostly organized by Asala, the Armenian terror organization. And what if some trolls tried to bash Samra on the internet? This is… Read more »

Steve, mugham comes to Azerbaijan from old India through the silk way, not from Islamic States, lol.
I forgive your irrogance this time

It’s funny, cuz Azerbaijan doesn’t even consider itself as an Islamic country and here we have an uneducated racist man connecting their folk music to Islam. smh

Then how come do they partake in the Cooperation of Islamic Stares? Why do they shout Allahu akbar at their local stadium when the fans were called to observe a minut’s silence in memory of Paris attacks? Why do they brandish the Turkish flag when they win ESC? Why do they have the Islamic symbols on their flag? Why do they have so many ISIS fighters? Also, they call all Islamic states to support them as part of Islamic brotherhood concept.

I bet you’re armenian, I don’t believe anything you’re writing here. I’m georgian myself and I know very well about Azerbaijan, azeri people, their music, policy and religious views. What you’re doing here is just not cool, just saying. Stop the hatred

See the guy has proved all the facts. So, he doesn’t seem to need your compassion. Moreover, for ISIS fighter statistics go and search proper media. Even the Independence and Guardian have shown how many fighters from which country have joined that. I’m not against Islam or Muslims. I just don’t like how Azerbaijan tries to act as a secular country, but support Erdogan secretly. They say these two countri are brothers (not sisters which is a shame for them as Muslims), so they will always will be together. And they even don’t disguise that as in this comment below.… Read more »

Yes, Azerbaijan supports Turkey all the time, so does Turkey. And Turkey does not want anything like that, please keep your “facts” to yourself. Azerbaijan also has great relations with Georgia, and we also love Georgians, so do turkish people. Please, stop spreading the hatred.

Thank you for coming out and restating what I said. Don’t fear to discuss the facts openly. I know you can’t deny them like you both shamefully deny the Armenian genocide hand in hand until now and keep up calling for an extermination of a whole nation. You even do lobbying in each European state to avoid its recognition.
Hopefully, Erdogan and Aliyev won’t chase you down for failing to “disprove” the facts.

Well, there’s no point in keep on talking, you’re so ignorant that you started to connect our traditional music with Islam, then us brandishing the turkish flag, then our relations, then your ignorant facts, then armenian “genocide”. You guys really know nothing, but war…. unfortunatelly..

Us brandishing the Turkish flag isn’t about Islam, but about our origins, we both are oghuz turks and we’re like brothers, so if Azerbaijan wins, then Turkey wins. It was always, it is so, and it’ll always be so. And your ignorance is really making me laugh, our tradional songs aren’t Islamic, yes majorty of people is muslim, and there’s no point in being ashamed of it. And again, it’s really funny that we don’t have fighters for ISIS, to be honest Azerbaijanis are not into religions. I, myself, as an Azerbaijan, I’m not into the religion, though I consider… Read more »

…muslim…but not islamic state ?????
e.n.o.u.g.h
How many Christian Churches are in Azerbaidjan? Where is the diversity that you claim from European countries?

You can find as many christian churches as you want. Here, we really don’t care about religion or anything. We do not claim anything, come and see yourself.

I am an atheist and I think all religions are usually bad, islamic included, but Azerbaijan is actually very secular and most muslims in Azerbaijan are not religious at all.

Their support for Turkey’s music scene and other areas is not based on religious attachment but yes on their shared ethno-cultural heritage.

Both are Turkic people with a long and shared history.

Also note, most Azeris are shia while most Turks are sunni, these two groups are often rivals, so I can assure you that what keeps them together is not their religion.

That’s what I explained above but ignorant people are always ignorant. They won’t accept you, yet they will think you’re wrong.

‘Traditional song that sounds islamic’? Haha
Not even talking about ‘1944’ but about some armenian songs in contest that used veeery similar vocal technic as well.

agree, so much people are bored of their entries(I love them tho). DiHaj is amazing tho!

Azerbaijani is not exactly the best language for singing but they could indeed produce a masterpiece in their own language like Turkey did with Dinle.

Polegend Godgarina , while the Italian language has 6-7 vowel phonemes the Azerbaijani language has 9 vowels and it is considered one of the most melodic languages amongst turkophone languages. In songs azeri and Turkish languages sound different and also music schools are distinctive in these two countries.

Polegend Godgarina, while the Italian language has 6-7 vowel phonemes the Azerbaijani language has 9 vowels and it is considered one of the most melodic languages amongst turkophone nations. Btw, Azerbaijani and Turkish languages sound different in songs. And both countries have distinctive music schools.

DiHaj looked way better with the slicked back hair, her new haircut is a bit Nina Kralyich.

I really like DiHaj, but any 12 points that Azerbaijan gets is automatically fishy. The one thing that Portugal did wrong this year.

Skeletons is not a bad song that it didn’t deserve 12 points. And it’s very disguisting that each time we get points you guys say “it’s all about oil” or “it’s all about money”, or “it’s all about gas/pipline” and etc. We spend our money on our country, not on anything else ~such as giving money to the juries or etc~. Peace out 🙂

No Name
Reply to  Jonas

Even more wrong than giving 5 points to Spain???