The Virus represented Georgia at the Junior Eurovision 2015 with the song “Gabede” (Dare) and placed 10th. You’ll remember that they were full of life and energy and made us smile every step of the way during JESC 2015.

Congratulations to #Georgia’s #JESC 2015 act, The Virus, who have been revealed as the interval act for Junior Eurovision 2017. Our @rezomamsikashvili grabbed a pic with them after the news broke this morning. #JESC2017 #ShineBright #eurovision #junioreurovision Photo by @marcnetherlands

The act was among the favourites of our editor William, who described the act this way:

Powerful harmonies, an easy-to-remember chorus, neon-coloured outfits — what could possibly go wrong? Georgia embraces crazy with alpomb and the kids serve major musicality with a healthy side of wackiness. The chorus may be repetitive to some, but it’s a clever device to court votes on replay. These kids love what they’re doing, which makes it difficult not to love them.

Composer Giga Kukhianidze — who has worked on almost all of Georgia’s Junior Eurovision songs — teamed up with The Virus for again for their interval act number. He composed a new song for them — “Atsabatsa” — which will be performed during the Grand final.

Ben Kadagidze provided the lyrics and Boriko Shxiani arranged it all. Twincity — the head choreographers of Junior Eurovision 2017 — will help them make shapes and ensure the stage is lit.

Officials have also revealed the new Junior Eurovision trophy. In recent years the trophy has changed with each edition of the contest, but this new design will now be used year after year.

“The whole microphone is supposed to be in clear glass with color lines inside the upper part of the microphone,” says its designer, the glass artist Kjell Engman. “These color lines symbolize sound streams that flows. It’s also these colors we think you can let your fans vote about.”

Are you excited? Let us know all your thoughts in the comments section below! 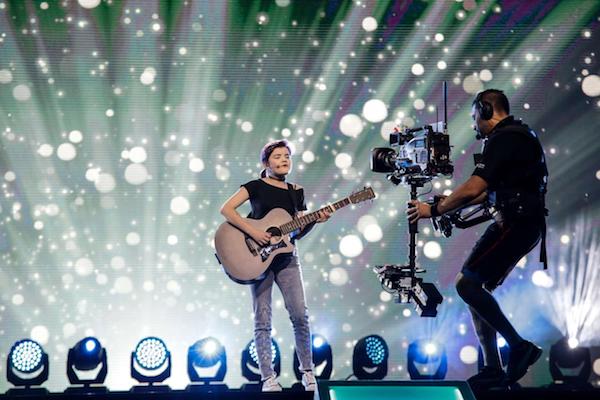 Junior Eurovision 2017: Who had the best first rehearsal on November 21? (Reviews and Poll)

When is teh coverage of the rehearsals coming?