The last we heard from Cyprus, broadcaster RIK was in the middle of selecting candidates for its 2018 national final. But latest reports suggest that the national final has been scrapped and the broadcaster is looking to a previous winner. RIK is reportedly in the process of negotiating a Eurovision comeback with 2005 winner Helena Paparizou.

Cypriot showbiz blog Show Time CY reports that RIK has made a “strong proposal” to Paparizou. However, reports suggest nothing has been confirmed yet.

If Paparizou accepts, she’ll be joined by fellow Greek-Swede Alex “Alex P” Papaconstantinou. In September, the hitmaker was confirmed as the songwriter for Cyprus’ entry for Lisbon. He and Helena have history — Alex P has previously written songs for her, both for solo releases and as part of the pop duo Antique.

It could also be a serious bid for a Eurovision victory for Cyprus. The sunny Eastern Mediterranean nation has never won Eurovision. After Portugal’s 2017 victory, Cyprus is now the country to have competed the most times at Eurovision without winning.

This would mark the third Eurovision appearance for Paparizou. She first performed for Greece in 2001 as part of the duo Antique. Their song “(I Would) Die for You” placed third and was a big fan favourite.

Four years later, Paparizou returned to Eurovision as a solo artist. She struck gold with “My Number One”, which gave Greece it’s first — and so far only — Eurovision win.

Paparizou made a comeback in 2014 in her country of birth. She competed in Sweden’s Melodifestivalen with the anthem “Survivor”. While the song initially didn’t make it direkt till final, the title proved apt as Paparizou survived the andra chansen round and eventually finished fourth in the grand final.

Paparizou has since built up her pop career in Greece. Last month she released the music video for “Étsi Ki Étsi” (So and so).

The news of a potential internal selection comes as a surprise, following the previous confirmation of a national final to select Cyprus’ artist for Lisbon.

Last year the broadcaster revealed that Cyprus would pick its singer through a national final held in January. It would be run as a talent show, with the contestants performing cover versions to allow their talents to be judged.

The winner of the national final would then go on to perform the song written by Alex P.

Back in November, the broadcaster shared a photo from a selection session. Alex P was shown along with Melfest boss Christer Björkman and choreographer Charis Savvas. The three men were said to be involved in the auditioning of acts fo the national final.

However, no more details of the national final have been made public, and now it appears that, for whatever reason, the broadcaster has put an end to their plans for a national final.

What do you think? Should Helena Paparizou make a Eurovision comeback with Cyprus? What sort of song should she sing? Leave your comments below! Israel: Rinat Bar withdraws from The Next Star for Eurovision saying “it is too much for me” 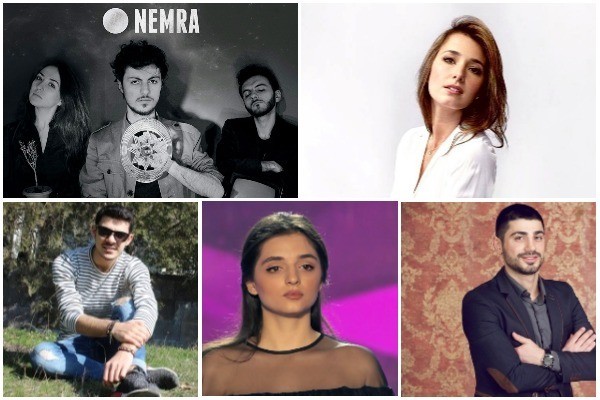 You ALL forget something.Helena is not like Perelli or others who competed for a second time in ESC and failed. HELENA HAS PROVED that when she actually competes in ESC, she succeeds. Sha has already participated 2 TIMES (and not only one time like others) and both times her participation was a major success (2001 and 2005). So instead of comparing her with Perelli and other loosers, you’d better compare her with Johnny Logar or Dima Bilan.

I would like to see a Turkish Cypriot represent Cyprus someday.

i would like to see turkey leaving nothern cyprus and leaving the island to those which actually belongs.

fyi, that would never happen because cypriots have dignity

If two people from the UK can represent Cyprus then so can a fellow Cypriot from the other side of Nicosia northwards.

It’s a small world after all.

First of all, Helena would do it only if the song is good enough. Otherwise, she wouldn’t even try it.

Second, I don’t think that not being a Cypriot is a problem, because remember the years Greece was represented by a Cypriot (Anna Vissi in 2006, Loukas in 2011, Eleutheriou in 2012, Maria Elena Kyriakou in 2015). The 2 countries are like one on our minds, we share the same language and culture.

I’d love to see Cyprus win some time soon! It would be amazing! However, I think Helena won’t do it. (unless the song is sth extraordinary)

Fake news. She collabed with another country.

If and only if she has a good song she should do it. If not then she could damage her career.

Doubt it. Elena has a busy career, she don’t have the time. Plus she is to attached to both Sweden and Greece, she wouldn’t change sides.
These days it is a risk sending former winners to the contest. It’s not fresh any- more. I think Elena is well we are of that.

Am I the only one that finds it sad for a winner to return? For what?

I feel like Cypriots are doing their best given their resources, which is more than I can say about Greeks.

If her song is like that ethnic dance dated track she released last summer I can’t she her not even qualifying.

OMG I really hope she won’t do that mistake.
We have seen what happened to all Eurovision winners that came back. She should let everyone remember her as the young fresh girl that won back in 2005.

Johnny Logan?
Elizabeth? (Won in 1985 and got to 2nd place in 1996)
It depends on the entry and of course the other entries that year

I am talking about the new century. Dana International, Charlotte Perelli.
And Charlotte had a great song.

Ain’t happening. Paparizou is no free agent, she’s as much Swedish as she is Greek. She has no links to Cyprus. Besides, she has a strong career. Maybe she’s being involved as a songwriter or judge for the NF?

Actually she is seeing crazy airtime on Greek radios and has released one of the biggest hits of her entire carreer this winter (An me deis na kleo), so I highly doubt she would do Eurovision. She is relevant again after quite some time. She’ll probably want to promo her song.

So her career has not been set and she has nothing else to do?

Considering she’d be going for Cyprus after winning for Greece and trying for Sweden, she’d be one of Eurovision’s biggest free agents ever.

That would be so nice to see her on ESC stage once again. 😀

you don’t mind that neither she or the author of the song has any connection to Cyprus?

Would it be the first time a former winner goes for another country?

No, there are a few other examples (Anne-Marie David as well as Elisabeth Andreassen for example).

God no please. Never been a fan of any of her songs, especially not her recent music. This would turn into a Charlotte Perrelli ESC 2008 type of show.