In just a few hours, Latvia’s Supernova 2018 kicks off with its first semi-final. Ahead of the contest kicking off, the Wiwi Jury has been reviewing all 21 competings songs. Now it’s all said and done, we have our winner: MADARA, with “Esamiba“!

Latvia’s “epic cello girl”, as she’s been described, took the win with an average rating of 7.79. In her Supernova debut, and with a song unlike anything Latvia has sent before, will MADARA take the victory?

The best: In the last couple of years, it’s become clear that you don’t have to conform to regular pop music to do well at Eurovision — or even, to win. Latvia have flirted with the idea of doing “something different” over the last few years, but entering “Esamiba” would be their most daring entry yet. If Madara can perform this live with true gusto, then I wouldn’t dare them to send anything else. (Chris, 9.5/10)

The worst: “Esamiba” reminds me of “Blackbird”. It’s the kind of song that works as an intimate listening experience on headphones. But songs like that never do well in the context of a rowdy arena setting or watched at home in boozy viewing parties. It seems like a misguided attempt to follow in the footsteps of the 2017 winner, but Latvia should be doing their own thing. (Robyn, 6/10)

The best: I really enjoy the dark picture that Laura is painting. It’s edgy and Laura exudes the sass that the lyrics convey. Lyrically, the song could use with some minor tweaks to make it a bit more coherent. In its current state though, it’s still a very respectable entry. There is a lot of potential for Latvia here. (Antranig, 9/10)

The worst: Now this is a dark horse! Before Supernova, nobody had heard about a Latvian born, Brazilian girl who sings better than most of the local stars. Unfortunately, whilst the song is good enough to reach the finals, it means her fanbase in Latvia is close to nothing. It isn’t also the most engaging song throughout. (Edgars, 5/10)

The best: Throw on the tank top, grab some tissues and let’s cry together in the club! Markus may be emotionally torn, but he sounds so smooth, sexy and in control — I’m ready. The chorus is big enough to make this memorable but sufficiently reigned in so that it doesn’t lose its touch point with this ultimately tender dance song. Markus is moving from aspiring pop star to proper artist. (William, 9/10)

The worst: There’s nothing particularly exciting about this entry. There’s a decent beat and a good pre-chorus, but the rest is just background music and too many lyrics. Seriously, too many lyrics. It even becomes slightly irritating, especially since it starts to repeat in the three minutes. (Luis, 5/10)

The best: “Younger Days” sounds very current and could do very well at Eurovision. Some of the lyrics are very clumsy and they would need to be tidied up if this took to the stage in Lisbon. I also believe this needs a more powerful final chorus to really hammer it home. Ultimately, this is far from perfect…but has all the ingredients to be Latvia’s best choice. (Antranig, 8/10)

The worst: You can assume what Edgars tried to do here is to go with the tropical summery dance vibe that it’s in right now. At the same time, he wanted to write a dreamy pop song about running away with his sister. It’s a really sweet idea. But it’s not catchy or energetic, and the lyrics are way too weird to get into. It really misses the mark. (Natalie, 3/10)

The best: Last year Katrine Lukins stood out – even if she placed last in her semi-final. But this year, she has a much better song and one of my favourites as well. “Running Red Lights is a modern song with a great beat and ultimately is very memorable. (Lukas, 8.5/10)

The worst: The song starts and you think this could be a really powerful dramatic pop song. But the longer it goes on, it just doesn’t get quite get there. It’s pretty much 100% chorus, and it’s not really even a memorable or catchy one. The tired metaphors get in the way of the music and I still can’t quite grasp what the song is about, or what she even means. (Natalie, 5/10)

We revealed yesterday that Markus Riva was your favourite in our Supernova 2018 poll. MADARA finished second in our poll, and it looks like it could be a close battle between the two.

You can watch the first semi-final of Supernova 2018 tonight from 20:30 CET, live on LTV’s live stream. Who do you want to see qualify? Let us know in the comments below! Melodifestivalen 2018: Kamferdrops will not be disqualified over song’s early release 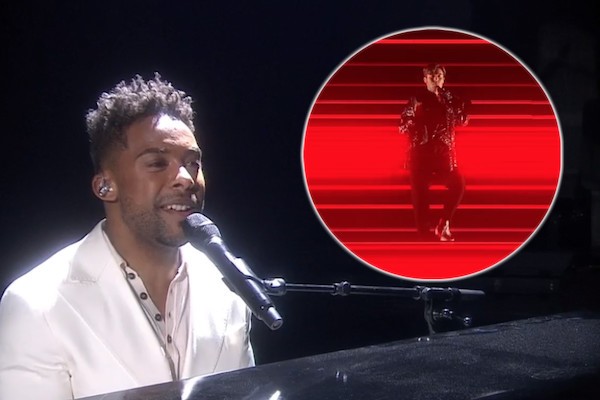 I think it is time for a misheard lyrics post from you guyes, here for example, Markus Riva seems to sing “say that you numb me”

is Esamiba a pop song? No… till today I thought that Eurovision is a pop song contest 🙂 Simply imagine that all 21 songs would be equal Esamiba all with acoustic instruments, slow and lyric. Does such list keep your interest to listen all 21 songs? I think Esamiba is from another genre of music (theatre music for ex.) and because it’s different from another pop/electronic or rhythmic active songs in LV list, can attract some interest and even stand out. There is no Radio format what asking Radio when you would like your song some Radio people take in… Read more »

why does it have to be a pop song? then you can skip a song contest and just listen to radio wallpaper. no one wants to make ESC into something with only one type of music,pop music is the most generic one

I agree with the jury! Esam?ba is a masterpiece! Top 5 in Lisbon!!

I am in agreement here.

When many thought Salvador’s “Amar Pelos Dois” was not even worthy of being a contender, some of us thought it would definitely be Portugal’s first top-5 finish.

I happen to think that, if Madara wins with “Esamiba”, Latvia will easily have their highest placing in years, if not win the whole thing.

Does nobody think Esamiba is a bit overrated? Like there has to be another song in Latvia’s national selection? Or there aren’t?

Esamiba is the only song that can achieve something meaningful in Lisbon. Time to be brave Latvia!

Agree with your sentiment, but Latvia has already been brave for three years.

Man, I hope the Wiwi juries get this one right.

I do too. Esamiba is a masterpiece!

For tonight, I hope Sudden Lights make it to finals.