It’s only been seven days since the deadline for song submissions in Romania, but the level of excitement among Eurovision fans is already sky-high. A plethora of talented artists have revealed their songs, and you can listen to all of them here.

Despite a strong pack which includes veterans Electric Fence and Luminita Anghel, Eurovision virgin Diana Hetea has emerged as an early favourite. In the 5 days since she published her song on YouTube, she has garnered a lot of praise and a small army of both Romanian and international fans. A former X Factor contestant and a vocal powerhouse, Diana entered the contest with the gorgeous ballad “I Believe in Love”. It’s hitting all the right notes required for Eurovision.

We also recognize the enormous potential of this song  and we are already projecting that, provided she delivers on stage, will strike awe among viewers and fear among her competitors. After Sunday’s live audition in front of the jury in her native town, Timisoara, Diana was kind enough to answer a few questions for wiwibloggs:

First of all, who approached whom and how was your collaboration with the production team behind “I Believe in Love”?

The songwriters contacted me first, a couple of months ago, telling me that they had seen me on X Factor and that they want to work with me, as they wanted a strong voice for their track. I am very happy about this collaboration! They are very helpful in solving any issue and they supported me tremendously. Although physically we are far from one another, we are keeping in close contact and I would like to thank every single one of them, but especially [songwriter/producer] Michael James Down and the very reliable and patient sound technician Attila Lukinich, with whom I recorded the song at DS Pro studio in Timisoara. It was a pleasure to work with them all! What made you enter the Eurovision Song Contest this year?

As it is very important for me to evolve as a performer, I think it is a step in the right direction. I am constantly working on my vocal technique and on putting on a great show. I want to give as much as I can to the public. It all started after X Factor with the dance track “Back To Me”  with my [X Factor coach] Adrian Sina. I have also started a hopefully very fruitful collaboration with songwriter Andrei Kerestely.

How was the live audition in front of the jury? Did you get any feedback from the jury?

It was great and, to my surprise, I was nervous. The stakes are high. It was the first time that I was singing the song in public, and it was in front of the jury! They seemed pleased about what they heard. I would like to thank the TVR Timisoara team, who made me feel at ease. I was told that it all sounded perfect, although I didn’t hear everything all that well. The soundstage and technicalities can play tricks on you. You remember what Elena [from Mandinga] had to go through when her earpiece failed on the Eurovision stage last year. The way in which you hear the track or your own voice can make the difference between a good performance or a fabulous one. I would never settle for just a good performance.

There is no doubt in my mind that you will fly through the pre-selection. Are you preparing anything special for the semifinal?

Thank you, I hope so! We all believe in this song. It is my first ballad and I hope that we’ll give a great show. We’re working on a combination of elements, which will highlight both the voice and the ballad. It all matters, from the outfit to the lighting, the backing vocals, and so on. However, my priority is that my voice should be in top shape. It’s like the Olympics: a lot of training for a three-minute run. What are your hopes from TVR and the viewers?

I hope the technical side of the show will be flawless and I expect that the organisers will be flexible and easy to work with. As for the viewers, I just wish that they will love and show their support for the song.

What is your favourite Romanian performance at Eurovision?

We’ve had a lot of good songs throughout the years! The obvious picks are the ones who almost won the international contest. I loved Luminita Anghel’s collaboration with Sistem for “Let Me Try”, but also Paula Seling and Ovi’s “Playing With Fire” and Mihai Traistariu’s “Tornero”. Each of these performances was different and it’s difficult to pick a favourite. I know how hard it is to succeed and I admire the ones who made it so far.

What about foreign Eurovision acts?

Speaking of extraordinary voices, if you wonder how Diana Hetea sounds live, look no further than this stunning X Factor audition video. And if you want to keep up with all of Diana’s news, then visit her official Facebook page. 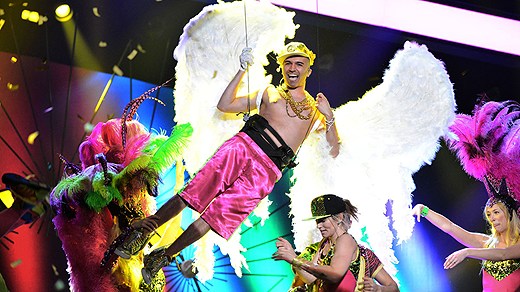 A lot of great voices this year in Romanian semifinals for Eurovision contest. I hope the best one will win. Go Romania!

Diana proceeded to the semi-finals. It’s no doubt the best song among the 32 semifinalists and I hope so much it will win. I was thinking the same way last year about Mandinga and they won, so…:)

Diana is the best…. whether you like it or not! Luminita is old -fashioned and out of date.Her way of singing is is like her.Listen and you’ll see the difference.Diana sings beautifully while Luminita yells and screams !

we re going strong this year! many songs that i like! go RO! cant wait to see who s in the semis

I really enjoyed her X-Factor audition clip… The setting, her voice, the judges’ facial expressions…

There are 4 favorites in Romania so far:

Yes, this is great! Better than all the other entries so far!

GO GIRL! YOU DESERVE ALL OF THIS! LOVE YA!!!

Very nice song. She would do good for Romania!

Luminita’s Unique is too hard on ears, so, NO WAY, indeed! 😉 I SIMPLY LOVE THIS GIRLS’ GORGEOUS STRONG VOICE!

One of the favourites? No way! Sorry but Luminita’s Unique is … simply the one!