It’s been quite a while since we published a Eurovision Open Caption. However, Genealogy recently released some new publicity shots, and we couldn’t help but think it was time to revive this feature. Here’s how it works: we supply the photo and you supply the caption. In this photo, we have the six members of Genealogy (Essaï, Tamar, Vahe, Mary-Jean, Stephanie, and Inga) in traditional Armenian dress. We couldn’t help but notice the mix of emotions and expressions on each band member’s face and want you to put words to it.

So go to the comments section and write your own caption now! Be sure to write which Genealogy member(s) you are referring to. And be sure to check out our previous Eurovision Open Caption posts when you’re done. You can see more of our Eurovision Open Caption posts here Maria Olafs in Moscow: “Unbroken is a breakup song” 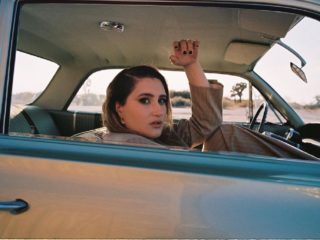 The one by Chris is spectacular – I’d totally watch that show! 😛

Inga: “I may not be standing in the middle, but I run the show around here”.
Stephanie: “I am really, really uncomfortable, can someone please give me some water”.
Tamar: “I am queen. Photo taker across the hall, who looks pretties of them all”.
Mary-Jean: “Let’s get this over with. Can I please go back to Australia now?”.
Vahe: “Essai might think he’s the man, but I got the rifle”.
Essai: “I’m the man, repeat after me in French”.

“Shit… did I leave the heating on?”

@ Criticca
Well its pretty much possible 4 anyone having african blood/ roots without being black & looking like an african original..

@ Well i predict that Azerbaijan will score much higher than the armenian song…But it doesn’t matter…Its not competition about which country is better…Both are good songs…I have both of them among the 10 qualifiers on theirs SFs 4 the record..

No one would get it if I made an Olan Mills backdrop joke, would they.

Bwahahahahaaaaa!!!! It looks like they had a lot of fun while playing dress up. I’m getting tired of these photo shoots…

Tamar: “Is this REALLY going to get me back to the top of the ENTM poll?”

Was the African suite on that Armenian-African guy really necessary? I doubt he’s even got African blood in him so he shouldn’t even bother cosplaying as an actual native African.

Essaï and Vahe are feuding over the love of Mary-Jean,
Tamar is the evil bitch of the show.
Inga is the domineering matriarch
Stephanie is someones sister and in love with the other bloke.

“You don’t know what storm is coming your way Europe”

“these clothes… they’re the reason why we left armenia. thanks a lot, guys!”

Why Armenia change the title of song, Face the shadow instead Don t Deny , because lyricks don t deny repeat so many times in song.

Stephanie: Why df am I wearing this again? & Essai looks like he just remembered that he forgot the stove on at home

Inga: ok guys, so these are the dance steps for Nor Par (or is it Jan Jan? I don’t remember) don’t fuck it up. Where my girl Anush at?

man this pic shows the power of Armenian Soul

Tamar (I think, the one at the back 3rd one along from the left): Forget this! Theres something grabbing my attention over there!! mmmm… Its chocolate!
The men at front: I can pretend the things I’m holding are lightsabers!! OI, you taking the photo turn and face the shadow so you don’t know when we will wack you with light sabers!

Its beautiful song..
I don’t like it in the same degree i was weeks ago though..
4 me its qualifier…Especially with a great performance..

“Mom made us dress up”

For me this is second bad song from Armenia after song from 2013.
They don t deserved to be in final, but thanks to votes from 5 other countries frome ex Soviet zone plus votes from France,Belgium,Greece… they wili go to final.
For me best 3 songs from Armenia are
1. 2009
2. 2006
3. 2008

Mary-Jean: “Take this box off my head.” She looks pissed!