Steady yourself — Belarus’ national selection for Eurovision 2017 is right around the corner. In recent weeks the Wiwi Jury — our in-house panel of musical unprofessionals — has been listening to and reviewing all of the songs. Next up is Isaac Nightingale with “On the Red Line”. Did this songbird get our blood pumping? Read on to find out.

Isaac Nightingale –  “On the Red Line”

“On the Red Line” reviews

Robyn: “On the Red Line” seems to have come from the Nina Sublatti School of Oximated Lyric Writing, but perhaps “Why the debris on the floor?” is a question that needs to be asked. “On the Red Line” has an undeniably catchy early ’90s feel, and Isaac gives a good soul vocal performance. The song itself is repetitive and never seems to go anywhere, but it’s still one of the best in this year’s national final.

Luis: This offers some variety, but it still falls in the category of “lame Belarussian NF entries”. The title “On the Red Line” suggests punch, edge and grit. But what do we get? A boring rip-off of any male pop singer from the late ’90s and the early ’00s. Isaac has a cool voice, but that’s all. There’s no hook. There’s nothing memorable.

Kristin: I’ve heard this song a million times before and this time I like it. It makes me want to bust a move and I can see this going all the way. Maybe it’s oximated, maybe a little lame, but there is something that grabs my attention. It might be Isaac’s voice, it might be the beat. Either way, this is definitely a strong entry and one of my faves in the Belarusian NF of 2017.

Mikhail: It starts nicely with a cool jazzy vibe, but soon gives way to that weird ’90s beat. Thankfully everything else works: the melody is nice, his voice is charming and the arrangement creates a mood. If he wins he’ll need a major revamp to even think about qualifying for the final at Eurovision.

Sami: Isaac has a bad-ass name and impressive voice, but he really needs a better song. It’s boring and doesn’t really offer anything to grab on to. All the points go to Isaac himself. He pours emotion into the mediocre tune. I strolled through his back catalogue and sadly they all sound like “On the Red Line”. What a waste of great talent.

Chris: I suppose the positive thing about “On the Red Line” is that I could, just about, see it at Eurovision. Isaac would need much better diction were he to get to that stage, of course, but he could work on that. There’s enough of a familiar tune here that, whilst it doesn’t ever hook you, it’s pleasant enough to hear.

Antranig: “On the Red Line” is full of unfulfilled potential. It’s certainly not bad but it’s not memorable or particularly interesting. Isaac’s vocals are strong but they don’t match the song particularly well. He has great stage presence but the song sounds the same for three minutes — a plateau of mediocrity. 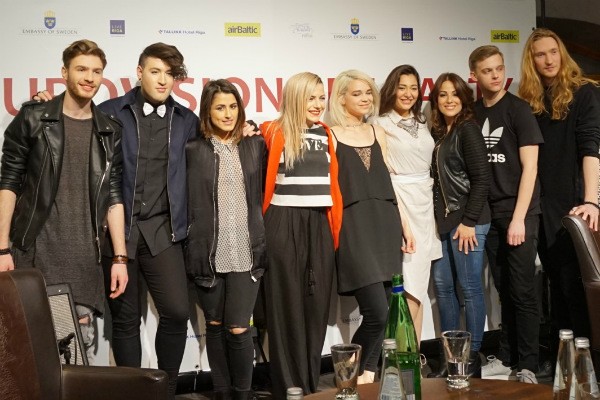 Melodifestivalen 2017 running order to be revealed live on Monday

This isn’t too bad a song. It’s not hook-based and does call back to the 90s, so I understand why some critics don’t find it catchy enough. I like his voice though. 🙂

By the way, where can I sign up to this “Nina Sublatti School of Oximated Lyric Writing?” 😀
(Apparently the word “oximated” is a scientific word for some chemical process beyond my understanding. Although I love what somebody has posted in the Urban Dictionary: “Oximated: a lyric from the 2015 Eurovision Song Contest. Literally no meaning.” :D)

This is one of my favorites to get to Eurovision. Based on the song and his voice, I feel like he has a lot of potential if he works at it. Having a vintage sound from another decade is not always bad…a lot of great songs came from the 90s and are still popular today. I feel like he could pull a Belgium 2016 (the one that didn’t grab initial popularity but got a good result because she slayed when it counted).

Vladislav is still my favourite with ‘Follow the play’

Belarus needs to get the decade right.

Studio version is better than the live version (obviously). He has a good voice, I’m not keen on the sound though. We’ll see. Not a fan.

Kattie’s song is a masterpiece.

@Polegend Godgarina Belarusian selection is more of a contest of singers rather than songs. There’s a 99% of chance that the song will be at least improved after selecting the representative. Therefore Isaac Nightingale would have been a good (if not the best) candidate. Just check this out: https://www.youtube.com/watch?v=erD2CACoFXc

Whew, Luis spilled that piping hot tea! His song is just as tragique as any other non-NAVI entry in that national final… I’m expecting to see scores below 6 for all the other flops. I’d love to be part of the Wiwi jury, my lashings would be merciless.

@Robyn Gallagher and what’s your favourite one? Mine is Nikita Hodas – “Voices In My Head” though it needs some improvement

Come on, he really shouldn’t have got a higher score than Angelika! This is bland. Just bland. There’s nothing to like here. It just plods along for 3 minutes and doesn’t do anything, doesn’t go anywhere. Very boring. I don’t understand why Antranig says Isaac has a great stage presence in his review, his moves make me feel a little awkward. He also needs to improve on his pronunciation. A lot. Not even the lyrics are good. This stands no chance, sorry.