Just as we published the snippets of the English version of her Selectia Nationala entry “Buna de iubit”, Feli has decided to waste no more time and to release the entire song, entitled “Royalty”, together with the video. She’s thus giving us a taste of what she will perform in Lisbon, should she win Romania‘s National Final this Sunday.

As we expected, the Romanian diva shot both versions of the video in the same location, in Peníscola, Spain. “Every woman around is down with me / We are royalty,” Feli sings, surrounded by beautiful women on the steps of that “Game of Thrones” castle.

While the English version of the song keeps the same melody and instrumental, the new version is quite sassier, with lyrics like “All hail the queen” instead of the Romanian “Lasa rufele” (“Leave the laundry”) for instance. Nonetheless, the message of the song remains the same: women are the queens of our world and need to be revered and celebrated as such.

Feli has hinted at the fact that she will perform the song in English, should she win Selectia Nationala 2018, and if this is the final version, we think it’s very appropriate for Lisbon and for 2018, a year of female empowerment. And, while Feli is currently second in our poll, we’re sure that she can be the queen of Romania’s National Final, with the right attitude and dynamic staging on Sunday.

We’re curious though: which version do you prefer? Is it the Romanian language of “Buna de iubit” or do you prefer “Royalty”? Let us know by voting in our snap poll below. You can only vote for one of the two options.

At the moment, it is not clear which version of “Buna de iubit” Feli will perform on Sunday, during the Selectia Nationala National Final. Fans are speculating that, after she performed the Spanish version at the live auditions and the Romanian version in the semi-finals, she will sing in English in the final, but the singer has not confirmed the rumours.

What do you think? Does “Royalty” make Feli good for loving (“Buna de iubit”)? Let us know in the comment section below! 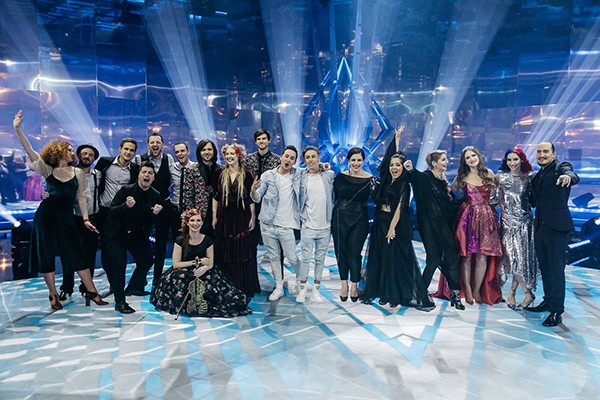 I think it translates well and it has a message that will resonate with a lot of people so while I’m usually against translations in this case I say go for it ?

I am confused. Is it women or man

I like it, it doesn’t lose its essence for me. Translations usually go wrong, this one did well.

The english version is not as bad as I thought. However, if she wins, she should keep the romanian language. It’s part of the charm.

Girl…keep it in Romanian. A song like hers has better chances in her native language, English is more for songs that aspire to be successful internationally/that want to deliver a message.

So you’re saying that her song can’t be successful internationally and doesn’t have a message.

Just so you know, we never did well with romanian versions.

So, Voltaj’s qualification and subsequent 15th place in the grand final isn’t ‘doing well’? Sure, it was bilingual, but it had a lot of Romanian in it.

We’ve tried 4-5 times with Romanian language from 18 participations, just 2 times entirely in Romanian and that in the 90’s. In my opinion Voltaj for example would have never reached the final singing in English, the whole thing about that song was the Romanian language and I’ve seen many people speaking about what a beautiful language it was. We are tempted to gain conclusions from solitary statistics that have 0% importance. Many people were saying last year that rap never did a good impression in Eurovision and that’s why ‘Yodel It’ will fail, but that was a stupid argument… Read more »

Royalty is also good but I voted for Romanian version, cuz it sounds much better. I hope that she will keep it in romanian for Eurovision. :/

The three versions are nice (Spanish, Romanian and ENglish). But if she wants to fight for the win at ESC, she needs to sing it in romanian all the way.

she has said she only wants to share her love for music through eurovision and the message of her song, winning isn’t important for her

the english version is really nice, i can see it being a summer hit tbh

the romanian female Salvador of this year, with a true soul and love for music very lovely to see 🙂

Are you back again, are you still in love with Ilinca? You are a troll pretending to be an imbecile, moron, but this is only one of your names. You’ve said you only care about Ilinca to qualify, now you have a new crush? I wish Feli would have withdraw when her father died because she doesn’t understand Eurovision. It’s not about her wish to share her music, she is representing a country, and she will not have my vote.

You need to chill.

Go #TeamFeli i want you to represent Romania in Lisbon, with the romanian version, nothing beats own language 🙂

she’s such a sweet girl, the trophy isn’t important she just wants to share her love for music through eurovision

The English version snippet made BQL’s song even worse for me. Way worse. Ina Shai’s quite like. So far.

Definitely team Feli either way. I’m sure I’ll warm up to the English version too.

I’ve heard it in English. It is not as bad as I thought it would be but she needs to polish it since not all words are comprehensible. A lot better than Yodel It anyway. I would still vote for the Romanian version though even though it would work well with the chorus in English. The whole package matters and language is important too. Why not try bring something better

Well as long as she sings in English because she wants it and not because she is forced to do it or think her language is less important than Engish that’s the most important thing. I still think that nothing was wrong with her entry. I’m quite disappointed, it seems like that it’s still an issue for many countries to sing in their language. Anyway Good luck to her to her in her NF and the others.

So am I the only one really annoyed by the moaning in this song? Sounds horrible! It really makes me wonder how this appeals to the masses while even Fusedmarc’s “yeah yeah”s were so hated.

It’s amateurish to change every day, and to disrespect people you ask votes from.
I prefer Romanian, English is good too, but only if it’s the first version you competed with, in front of the jury, so the jury can hear your pronunciation.
Feli is cheating changing like that so often.

Both versions are great, I don’t mind whichever she chooses to go with. She just needs to have the sass of that music video on her stage performance which was a bit lacking in the semi.

Her dad passed away few days before semi-final and this is why she didn’t have a great show! 🙁 But if she win i’m sure in Lisbon it will be a big show! She have the best team of romanian music.

Now I hope that Jukebox wins. Or at least the Romanian fans convince Feli to leave her song in Romanian, like it happened with Voltaj.

I mean, I’m all for the big burst in national language pride (since they lifted the language rule, Romania’s only sent three songs even partially in Romanian, and one of them was alongside English, Italian, Spanish, Russian, and French), but I also like the sass of the English lyrics. I dunno, whatever she’s comfortable with. I hope Feli wins this.