At Eurovision 2016, two years after Russia illegally annexed Crimea, she reminded the world of the region’s painful history.

And in recent months Jamala has emerged as a cultural ambassador, travelling Europe to raise funds to support Ukrainians as Russia wages a bloody and devastating war.

Speaking to the Press Association following her recent performance at Glastonbury, Jamala discussed the European Broadcasting Union’s decision to stage Eurovision 2023 outside of Ukraine.

“It’s really sad the EBU decided to take away all this chance and all this hope,” she told the news agency.

“[But] I really understand that it has to be in a peaceful place for participants and for everybody.”

If the contest has to be taken from the Ukrainians, she agrees that the U.K. deserves the right of first refusal.

“Great Britain came second in the competition, so if Ukraine is unwilling to host the event for whatever reason, it would be fair to hold it in one of your cities.”

Jamala said the decision on where to host the competition was “premature” and that, as a Ukrainian, she found it very painful.

In a second explanation of their decision, issued following criticism from within the U.K. government, the EBU elaborated on the security risks posed by staging the contest in Ukraine during a war.

Among other things, it cited a severe risk of “air raids/attacks by aircraft or attacks by drones or missiles, which can cause significant casualties.”

“The EBU sought third-party expert security advice which clearly stated that the counter measures proposed to mitigate the threats planning the event in Ukraine were insufficient for an international public event and the risk rating of a mass casualty event due to the ongoing conflict is ‘high’.”

Jamala fled Ukraine with her children shortly after bombs started falling on the capital. Her travels through Europe have opened her eyes to the gifts so many take for granted.

“It’s the first Glastonbury in my life and I see that freedom,” Jamala said.

“It’s a treasure to be human… to be wearing whatever, and just express yourself. You don’t even know how important it is.”

“We have a voice, we have strong voices… We have our vision and our followers, we have our fans. And we can really do something to talk about this because we can stop this evil only if we are united, only if we are together.” 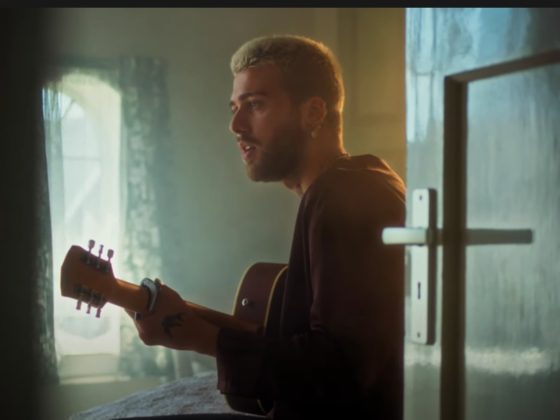 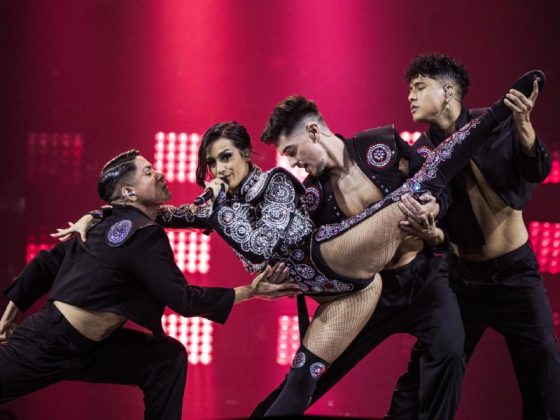 We must form a UNITED kingdom…

There seem to be a lot of people on this thread really bitter about Jamala. Like her or not She has actually said something very measured and sensible here. And as a previous Eurovision winner why shouldn’t she have a voice? As this news item says she is traveling trying to raise awareness and funds for her country. What else should she do, pick up a knife and stab Russians? Hide under a rock? Or use her fame to try and do something good. I never liked her Eurovision song but my god I don’t have hate for her like… Read more »

It would be a more powerful statement if she didn’t already fled the country. How is she expecting eurovision to be in Ukraine while she is still not back in Ukraine

Oh, thank you for allowing us to host , Jamala . Now go away and back to your obscurity

Jeez you really are bitter about her

Everyone knows Ukraine won because of the war, though

Girl, Ukraine did not even deserve to win, its to want to be blind to think they just won cause they were the best

At least someone has sense enough..

She’s so annoying and unlikable.

Glasgow 2023 for sure will be a great event

Why do we still listen to what this “artist” says all the time?

Eurofan
Reply to  Im so fab

Totally agree. One of my least favourite winning song in recent years. Awful song and her voice just grates on me. Please stop wheeling her out to comment on anything Ukraine based.

Because 1944 is easily one of the greatest entries in the contest’s history and it needs to be recognized as such.

Denis
Reply to  Im so fab

No one is forcing you to listen..

TJCat
Reply to  Im so fab

She wasn’t stood in the middle of he street with a loudhailer forcing unwilling people to listen to her. She was being asked questions in an interview

Sure it’s painful. But perhaps the EBU can appoint Ukraine as the next replacement host for Australia or any other winning country that can’t host the contest itself in the future. I think that would only be fair.

Or maybe the UK will win the 2023 edition, and then Ukraine (supposing there’s no more war) will organise on behalf of the Uk in 2024.

Oh God you think in 2024 Ukraine will be a free country?
They stop fighting at the east

Well, she’s Pro Russian so, she will not be anywhere near this.

This year is just reflection of how political ESC is every year. Sometimes we don’t even notice that people rather vote for some country than for actual song.

Ngl, I think I understand why many small countries withdrew and don’t even remotely consider to come back 🙁

Jamala it is unfair that Ukraine won qith sympathy votes.

And is it Ukraines fault they did so? In the end it was people that decided by themselves to vote for Ukraine no matter what reason and Ukraine and Ukrainians shouldn’t be done dirty because of that

Oh God, look how the world is today because of Ukraine.

You mean “because of Russia“

@esc2022turin – This is the best take. Thank you talking sense in between all the Kremlin bots here.

The Kremlin trolls really have taken this place over lately. It still won’t help them at all with their agenda, but it’s kinda cute how they keep trying.

It has been weeks and there is still no confirmation if the UK really going to host next year. It’s quite telling.

Well, it dont have to be confirmed until september. There is still time

Oh, alright. I’m just anxious that the BBC will emerge from the negotiations saying they won’t take up the job. Then EBU will have to start from scratch with finding another host.

Well, I’m thankful that Jamala now understands that Ukraine can’t host the contest. But, given what is going on in the UK right now, it is increasingly unlikely that the UK will not host. I urge all fans and the EBU to see sense and understand that.

youve been saying this same sort of nonsense as to why the uk shouldnt host on every single thread mentioning the uk for weeks… its time to give it up. using “what is going on in the uk right now” as reasoning for them not to host sounds a bit insensitive in this context given what is going on in ukraine. i understand you have problems with your country but to say the uk isn’t capable of hosting a great eurovision doesn’t make any sense at all. the uk would be an amazing host country and do their best to… Read more »

Okay, I now see that the “what is going on in the UK right now” statement could be perceived as insensitive and inappropriate given the current state in Ukraine and I welcome that correction. However I do not see the UK being the prime host country as interim that the majority see. The UK right now is currently unviable and unsuitable to host in anyway shape or form for a myriad of reasons on a social, economic, financial and political fronts.

in recent memory i can think of several countries that have hosted who many like you would have deemed “unsuitable” to host a great eurovision like portugal, ukraine, and serbia. yet they did!

Hmm I just wonder if “measures” were put in place to ensure the UK finished second…..

Now that is a stretch. The EBU wouldn’t deliberately manipulate the results to ensure some countries finish in certain positions. Granted there were aggregate results for the six countries that were being caught to cheat and as a result those votes were discounted however, I do find it a bit suspicious that Azerbaijan and Georgia gave the UK 12 points where those countries have never gave a score higher than 4 or 5 in past editions of the contest and yes the UK did give Georgia 12 in 2016 with the Young Georgian Lolitaz however that is the UK awarding… Read more »

So quite possibly if this had happened a year earlier then James Newman would have got a whole bunch of 12s? What a farce.

Would such a thing ever happen at Eurovision, do you think?

you say this every bloody time its complete and utter nonsense

How is it nonsense for a country that is in political, social, financial and economic freefall to be able to host this contest in anyway shape or form? The UK isn’t a the saving grace interim host country that people want. I understand that my comments about “what’s going on in the UK right now” may be insensitive given the situation in Ukraine and I welcome that input however, the situation doesn’t change that the UK at this current time is unsuitable and unviable to host the next years edition of the contest in anyway shape or form.

What are you taking about. Yes there is a lot of controversial stuff going on but you can pick apart any country for that. We’re not talking about a famine? The UK remains one of the richest in Europe and the world, it has the infrastructure and resource to host the contest. The music and entertainment industry sits apart from politics. The commonwealth games are being hosted in the uk in a months time welcoming tens of thousands from 54 countries, the bbc are the host broadcasters. This is on a par if not bigger than Eurovision. are you suggesting… Read more »

I’m not saying that UK isn’t capable of hosting the contest. Far from it, right now there is too much in the country for us to host at the moment.

As long as Russia is NEVER allowed back (until it stops its war and pays Ukraine for the hell it has put it through), then ESC can be united in the face of this unjustifiable war by Russia.

At least Russia didn’t use wars to win the contest like Ukraine has in 2/3 times they won. They have always sent better songs