Our countdown of Team Wiwi’s favourite songs from the 2018 season national finals kicked off yesterday. We’ve already lost some favourites from the likes of Destination Eurovision, Melodifestivalen and more.

We’ll be bringing you five more each day over the course of the next week, as we wait to see who’ll join Eric Saade, Margaret and Kerli as a winning artist. Could Margaret even do “the double”? Or could she be in today’s five acts? Check out our list below:

With a new timeslot, hosts and overall feel, Supernova didn’t quite get as much buzz as usual this year. Even if it did start in October! But as some familiar faces like Markus Riva fell to the wayside, there was one act who got people talking: one woman and her cello.

Madara Fogelmane’s hauntingly beautiful “Esamiba” had some people calling it a potential Eurovision winner. Whether it would have had that chance, we’ll never know…

You know something’s up when people complain about San Marino throwing away a “potential top 10 contender”. Yet those were the words often repeated about Sara de Blue’s “Out of the Twilight”.

With amazing vocals and some remarkably strong production, Sara seemed a shoe-in for victory in the chaotic 1 in 360. But as we learned, nothing was ever for certain with 1 in 360. Sara ended up being pipped to the post, but rewarded with a host of new fans at least.

Rebecca might have been a Melodi Grand Prix newcomer, but she had some familiar support with her. “Who We Are” was written by 2015 entrant Kjetil Mørland, who supported Rebecca throughout her MGP journey.

Much like “A Monster Like Me”, this was a song focused on showing off Rebecca’s voice. No need for trickery or anything too showy here: Rebecca shined in the spotlight. The newcomer fought her way through to the final 2, only to come up against the unstoppable force of Alexander Rybak.

Make no mistake about it: Brooke Borg is determined to represent Malta at Eurovision. With a team behind her including Borislav Milanov and Sacha-Jean Baptiste, it seemed like everything was right for “Heart of Gold” to succeed.

But perhaps those dodgy lyrics hurt Brooke’s chances. Once again, she was the bridesmaid and not the bride, as Christabelle threw off the “perennial contender” tag this year. Will 2019 be fourth time lucky for Brooke?

This was the year of the returns in Norway, as Stella Mwangi came back to try and right the wrongs of 2011. She brought a friend too in Alexandra, and the two ladies stormed the stage to open up this year’s MGP.

A whole host of fun, this one certainly came alive on stage. They might have only made the first stage of the Superfinal, but they certainly left a lasting impression on fans. They’ll even be appearing at the London Eurovision Party!

What do you think of the latest five songs in our countdown? Were any of them your national final favourite? Let us know your thoughts in the comments section below! POLL: Who is your favourite duo at Eurovision 2018? 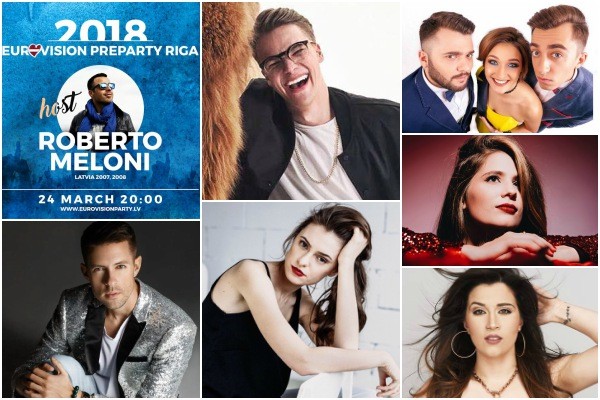 Eurovision PreParty Riga 2018: Send us your questions for the stars

SARA DE BLUE WAS ROBBED OF AN OPPORTUNITY THIS YEAR!

I so hope that Zoe robbed her of a win so that she can pull strings and have ORF internally select her for Eurovision 2019.

“Esam?ba” should have been much higher on this list.

Both it and “Who We Are” would have been my picks from their country’s NF.

I’m still mad about “Out of The Twilight” not winning 1in360. It would’ve been San Marino’s best entry in Eurovision.

Rebecca was robbed by a clown. Best Norway song since delicious Burger. Mariette is biggest national flop. Best national song is of course Drop The Boogie………..

I know they didn’t make it to the final in Eurovizijos Atranka, but I would love to see Gerai Gerai & Silvija Pankunaite’s “More Than You Know” ranked somewhere.

Esamiba is my #1, would be easily my ESC winner too. I think people overreacted to her live performance. It wasn’t polished, but they would have plenty of time to tip the imperfections out till Eurovision.

Two great acts for Norway!
“Who We Are” is a very good song with beautiful lyrics and Rebecca was on point.
“You Got Me” was just so playful and fun, it really came to life in the live show.

Indeed wow that Rebecca girl what a great song; the way we like it in Eurovision.
How on earth could they send that nitwit song ?

Sara de Blue doesn’t surprise me. San Marino is the last in my rank. What a shame.
Norway had a few good entries this year, and “You Got Me” was definitely my favourite one (as “Scandilove” failed live). Really nice song!

And wow, I forgot about Latvia! It is soooo much better than “Funny Girl”. “Esamiba” has a SOUL.

What? Only one Swedish song (28 spot) so far? Oh wow, I didn’t expect it. But no worries, I’m sure the top from 20 to 1 will be packed with Swedish songs from Melodiefestivalen 2018, coz we all know: Sweden is wiwi’s darling! While many songs from other national selections will be left outside this top (Moldova, Romania, Armenia, Belarus, maybe Hungary and Ukraine, too)…

And maybe Poland as well, as I don’t expect any song to appear, not even Ifi Ude’s one…

wiwibloggs. My opinion is just like in the review of rizzotto that you seem to forget that Sudden Lights was the nr 2. Are never mentioned by you while they were the hype. Very curious they in your top.

Keep my fingers crossed for Sudden Lights. They deserves more than anyone a high place… My number 1 of ESC 2018.

I don’t quite get this “Esamiba didn’t translate well live” idea. For me it was BY FAR the purest and most touching performance of Supernova. Still sad “Funny girl” won over this.

Well, as Latvian I can tell you that hers Latvian pronation wasn’t great, and after Laura’s semi performance it was obvious that she’ll win

Sudden Lights was the real winner of Supernova without a boycott of the organisation. Laura Rizzotto is the biggest mistake of ESC 2018!

Rebecca should have won the Norwegian pre-selection!

Brooke is an extremely good performer, but I’m glad that she wasn’t chosen this year.
She was amazing with Golden and it’s still a shame that Malta didn’t pick her, but afterwards she was so much better than her songs which is never a good sign… Give her finally the song which she deserves and send her then!

Esamiba was brilliant, would have been among my top3 this year, but the live performance in the final was extremely weak, so I got why she wasn’t chosen…

Heart of Gold is a bop. We need Brooke Borg to represent Malta someday, but she needs to come up with a winning song, because she’s capable of delivering it. The way she sells her songs on stage and elevates them to another level makes her an amazingly talented performer.

i totaly agree, i love her

A bit surprised that Esamiba tops out here. Still sad that she couldn’t translate it live or else it’d be in my top 5.

Brooke Borg Heart of Gold in the top 30? Just No!