It’s been one month since our beloved song contest stars shook, shimmied and sang during the grand final of Eurovision 2022. The team at wiwibloggs can’t get Kalush Orchestra’s “Stefania” out of our heads and our bodies just won’t stop moving when we hear Chanel’s “SloMo” (mo, mo, mo…). Unless we head to the Milky Way with Sam Ryder’s “SPACE MAN”, grab some tissues for Cornelia Jakobs’ “Hold Me Closer”, or start washing our hands along with Konstrakta and her “In corpore sano”. But our playlists don’t stop with the Top 5. We’re still loving Ronela’s “Sekret”, Brooke’s “That’s Rich” and LPS’ “Disko” to name just a few.

That we would compulsively listen to songs that failed to crack the Top 10 (or even make the final) isn’t surprising. Eurovision acts frequently fail on the big night because of bad staging or dodgy vocals or their divisive nature, while digitally re-mastered versions of those same songs go on to prove timeless. Remember Britain’s Gina G. from the 1996 contest? Her dance number “Ooo Ah….Just A Little Bit” only placed 8th, but it’s now a staple on dance floors from Manchester to Melbourne.

Now it’s time for you to let us know which songs you are still listening to. So pull our your iPhone and warm up your Spotify playlists to see which tracks you’ve played the most, and then vote in our poll.

You can vote for as many songs as you’d like, but you can only vote one time: Be sure to click the box next to each song you’re still listening to before pressing submit. The poll will close on July 14.

Rather than stressing out over the results, why not review our past winners? 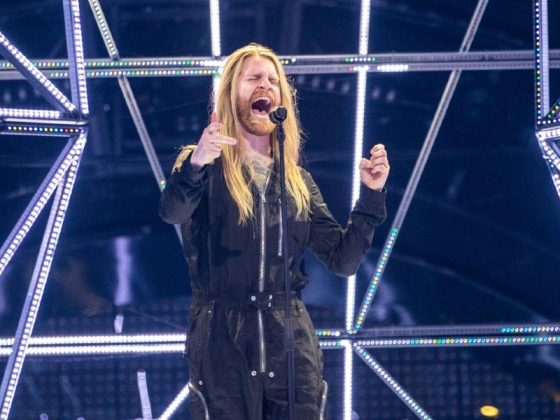 This is where 2022 songs are currently sitting in my Apple Music Top 100:

I liked most of them, but I tend to play these the most: Croatia – while the song itself isn’t particularly memorable, it’s Mia Dimši?’s singing voice that sells it for me. Estonia – “Hope” first came out when I was starting to suffer from ballad fatigue, so this was a nice change of pace. France – Love this. Georgia – Weird performances attract weird people. What more can I say? Iceland – This wasn’t my favorite by a long shot, but it really grew on me. It gives me “simple, yet elegant” vibes. Lithuania – A very classy follow-up… Read more »

Pity the poor soul who actually read all that.

Sweden, Czech Republic, Serbia, Latvia. Ukraine grew on me and got added to my playlist. Surprisingly to me, Estonia hung around in my head and I added that one next.

United kingdom, Serbia, Iceland and Latvia. Already forgot about Sweden to be honest, these four are still my favorite songs of this year’s contest, 1 month later. <3

Pretty much only Italy. I added Portugal and France to my playlists too, but I haven’t really played them yet.

Ukraine ofcourse… and Germany from an alternate universe, Pump it!

Interestingly this list is closer to my Top40 rankings than any other list, inc the competition itself, although France still not high enough!

I love Jezebel by The Rasmus Finland and Spaceman by Sam Ryder UK.

I originally hated Serbia but it eventually grew on me and now I absolutely love it! Very happy it did so well at Eurovision particularly with the televoters!

The fact that Norway and Romania are higher in this poll than the likes of Portugal, Greece, Italy or Lithuania doesn’t really reflect well at all on eurofans…

The fact that Ukraine is first is the one that less reflect on eurofans. Kind of suspicious, by the way.

Serbia could be a all-time-classic !

It is one of the entries of the decade, already.

I am quite surprised to see Poland and Estonia this low (and San Marino, people were screaming he was robbed, so I thought he would be higher, I was not a fan, but I am surprised)

2022 was a bad eurovision year… Not really a lot of songs have stayed on my playlist 1 month after the competition.

Sara James, the runner-up of Junior Eurovision 2021 just got a golden buzzer from Simon Cowell on America’s Got Talent. Would be nice to have an article about it 🙂

I hope Simon Cowell treats her well he has a habit of signing talented singers for 1 song then axing them.

Very few of them. However, I still listen to Cazzi Opeia. I did not like it that much back then but now, can’t stop listening. Weird, isnt’t it?

My 6 year old grandson watches all 4 hours of it daily. Knows every score every song and order of performance.

Currently I still listen only to the songs of the Netherlands, North Macedonia (I downloaded it on my phone and it keeps playing it occasionally) Ireland, Sweden and UK, but not as often as I kept listening to my favorites of last year at this point (a month later) last year. I don’t blame it on the quality of the songs, though, I’ve been dealing with a lot of stuff irl

I play Space Man almost every day. It gets me emotional to think we did that well. And you can pinpoint the two exact moments towards the end where Sam Ryder won the crowd and won Eurovision. He was the real winner.

Halo, cuz it is still in my workout playlist

snap is the one i still listen to the most. i’ve also been listening to croatia, cyprus, iceland, portugal, serbia and spain a lot.

Sweden, Spain, and the Netherlands for the most part tbh.

Spain – all the time, more than once a day
UK, Sweden, Romania, Italy – mostly every day
Others – never lol

Armenia that was one of my favorites in the first place and the UK.

Off topic: RTVE is no longer in contention to host the Eurovision Song Contest 2023 according to the President of the Spanish broadcaster. José Manuel Pérez Tornero speaking to Faro De Vigo has indicated that Spain is no longer in the running to host Eurovision 2023, should Ukraine be unable to hold next year’s competition. He told the publication that: We don’t want to be left with the mirage of a good result, we will try to win next year. We were also interested in organizing the Eurovision 2023 contest, but if Ukraine resigns, the BBC will organize it. It… Read more »

Stefania, Hola me babebe llamane, Brividi. SLOMO I prefer to watch more that to listen) cuz it’s perfect choreography and camera eagles like for all the years of Eurovision, and also Saudade. Lets the new season start faster, I want new artists and music

When the mood strikes I listen to Saudade Saudade on repeat, or Systur. Beautiful harmonies.

nothing but space, maaan

Where is the None option?

The Netherlands, Lithuania, Spain & the UK

SERBIA, lithuania, ukraine, slovenia, and portugal for me! i listen to all of them on spotify regularly but especially in corpore sano

I love the way Bulgaria has been added at the very end of your alphabetical poll, it means a lot

The LOTs this pm will be the first time I listen to this year’s songs since the GF. This edition was so bad with the irregular voting and such, but as least the façade is off. Just as Zbob and Zdub’s Roman said, this is a festival, they don’t see it as a contest. He’s right.

Among my all-time favorites: