Some Eurovision fans might call these songs soothing. Those less intoxicated with ESC might call them what they actually are: boring. In honor of all the songs that made us feel like we had swallowed a bag of opium, it’s time to present 10 Songs That Put Us To Sleep. You might need some caffeine to get through this…

In case you don’t remember, Belgium’s 2012 Eurovision act featured a woman repeatedly asking, “What would you do when my house was empty?” It’s a creepy question and suggests that she had a stalker digging through her underwear drawer while she was at work. Fortunately if he was in her house while she was performing this on TV, he likely fell asleep and got nabbed by the cops. This song is boring with a capital B. By the way, you don’t need to adjust your Youtube settings. She really isn’t moving. At all….

Members of the Wiwi Jury were not feeling this. HK Dick said it was “so middle of the road that you might as well paint a white line down the middle of the stage”. When we were running around Eurovision in Malmö earlier this year we kept forgetting that this song was in the contest until we saw Birgit turn up to a party or rehearsal with a microphone. Bad sign. She should count her lucky stars that the composer included that long (and very loud) note during the bridge. Otherwise everyone would have stayed asleep in the semis and been unable to vote her through to the final!

In this soulful blues number Magdi asks her ex, “Why did you leave?” We suspect it’s because her agony is on loop: she just moans, moans, moans and grieves, grieves, grieves. Debbie Downer rarely ends up in a contented relationship! Magdi has a great voice and we understand how she finished 9th in the final. But this number seems to stretch three minutes out to thirty. Thankfully the singer appears to go into labor at the 2:00 mark, and her screaming adds a bit of variety to the monotony.

Sweden 2010: Anna Bergendahl with “This Is My Life”

It’s Anna’s life, and we do not want any part of it. That this song became the first from Sweden never to reach the final was not surprising. Simplicity is great—and it doesn’t have to be boring. That’s why Lena won in 2010. Unfortunately Anna couldn’t figure out the equation. The back-up dancers in the white suits seem more awkward than eye-grabbing. (Watch them on mute shaking their arses and it’s hilarious).

One of the most unique entries in 2013, ByeAlex’s “Kedvesem” had a strung-out sound that brought back fond memories of that time we mixed barbiturates with alcohol. The mellow lighting added another dimension of “sleepy” to this and, despite our keen interest in the chiseled guitar player, made us want to curl up and say goodnight.

This is the part of the musical when you start regretting paying all that money to sit through a three-hour show. As you drift to sleep you keep asking yourself why the Lithuanian woman is singing in French, and wonder if white pianos and tailcoats have made a comeback. This is about as exciting as watching someone perform sign language. Oh wait a minute (actually that’s 1:40).

Um, the last time I checked Russia had 144 million people. They did not have to choose this. You know it’s going to be a long song when you’re more interested in the faux snow than the totally melancholic singer. The best part of this is at two minutes when the back-up singer asks, “What are you doing, man?” We were asking Peter the same thing!

Cyprus 2013: Despina Olympiou with “An Me Thimasai”

So we really loved chatting with Despina live on Eurovision.tv, and Wiwi lost some money betting that she would advance to the final. But in retrospect it is kind of obvious that this pared down number was not going anywhere but back to Nicosia. The staging is so simple it’s bland, and not even that lovely dress can save this. I hope her designer saved some of that lace so he could sew a pillow to help him through these three minutes!

Sometimes gimmick really does triumph. The only redeeming feature of this performance is Marie’s costume change, which takes place over the course of the last minute of the number. Seriously, that’s the only explanation for how this monotonous and bland song won Eurovision 2002. But props to Marie for rocking that salmon dress. Ain’t nothing fishy about that sultry look! 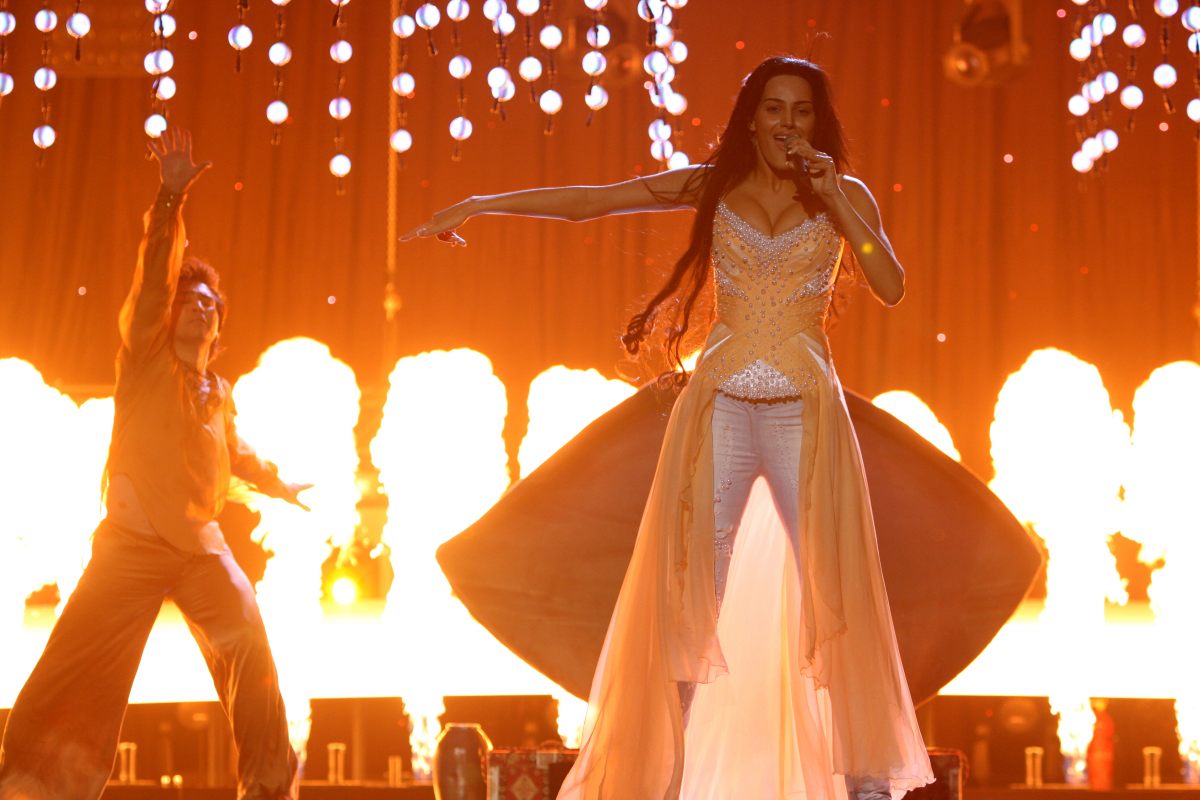 How Armenia Can Win Eurovision

Since when are ballads supposed to be fun? I don’t see point of writing this article.

Eurovision doesn’t always have to be an up tempo camp fest! This article really annoys me. Yeah, some of those songs aren’t great but it’s not because they’re ballads. They’re just bad songs!! You’d have a much easier time compiling a list of up tempo awful songs. Hungary 2013 was beautiful as was Estonia. Belgium’s song was actually good too. It’s not all about the show. Dare I remind you that it is a song contest!!

The most boring song and performance I’ve ever heard was Austrian entry 2012 “Shine”.

I laughed at this article because it’s so amusing. Good work Wiwi writers! You guys always provide the lols.

That being said, “Kedvesem” is a fantastic song!

I like a lot lullaby songs wouldn’t qualify them boring. In this selection some are good songs some not so good. But all are interesting songs, they have a groove, a something you cannot put your finger on it but makes you love the song – a welcome break from the typical/boring(for me) Eurovision songs. They reminded me of one of my favourite song ever which is also a lullaby song Janis Joplin – Summertime. You can check for it if you haven’t heard it yet.

“Otherwise everyone would have stayed asleep in the semis and been unable to vote her through to the final!” Well, technically they did anyway since the televoters placed her 13th. The only reason she went to the final was because the jury placed her 8th, thus getting her to 10th place and just barely making it to the final. (Of course they did, the jury loves boring ballads and hates anything different; just look at how they hurt Cezar and Who See.) I’m not 100 % sure if I agree with Kedvesem being boring though. Okay, it was a little… Read more »

I loved “När jag blundar” (especially with the Finnish accent 😀 it definitely should’ve qualified), “Et uus saaks alguse”, “Unsubstantial Blues”, and “Kedvesem”. “This Is My Life” was ok, wasn’t too crazy about it.

@Alex, And Russia still remains my least favourite entry from 2010. Even worse than the entry my Slovenia sent out that year.

@Alex, Nice to see that someone got it. 😀

You guys don’t realize that Russia 2010 was meant to be a joke! Peter Nalitch went viral in Eastern Europe with a music video for a song called “Gitar” involving exaggerated melancholic vocals, ridiculous visuals and even more ridiculous lyrics in purposefully bad English. If you understood what was going on, “Lost and Forgotten” was just amazing. Of course, none of Western Europe got the joke that year, and if I recall correctly, that translated to a total of zero points from Western European countries for Russia!

It’s amazing how we perceive things differently. In my opinion, Peter Nalitch & Friends’ “Lost And Forgotten“ is one of the best Eurovision entries of all times. 🙂

What about Israel or Malta 2009? I find them much more boring that Magdi, one of the best Hungarian entries. (The fact that they sent Chiara did nothing)

Are you people blind? Latvia 2002 = so boring. Look at the audience at the beginning. NO ONE IS MOVING except for those three fans in the front who are clearly on drugs lol

Yeah, I have to agree with Joey about being good with this list until Latvia 2002, although with less dramatics :-P. It kept me entertained at least, for better or for worse, unlike the other ones!

I think that the songs of Estonia 2013, Lithuania 2011 were just good songs and I am from The Netherlands and not from the Baltic countries!

Sweden 2010 was SOOOOOO boring. It doesn’t matter if it might have qualified. The jury was right to send that tosh home! Also, Kedvesem was AWESOME. But, yes, it was sleep-inducing.

You forgot to note that Sweden in 2010 would have qualified had it been 100% televoting … it was the jury vote that dragged her down. Anna did a great job and even if she did not qualify the most important thing was Sweden was proud of her. It was the favourite with the bookies, and with the fans, and definitely with me!

@ SQfan , that video probably shows eurovision at its lowest and from its worst period 2002 till 2006 which in my opinion was the worst year ever .. Soo many awful joke acts ..

Kedvesem was a lullaby, yes, but not boring at all. It was a classy piece of art and a respectable feat from Hungary.

Don’t agree with this ballad-bashing article. I’d rather not have ESC being the kitsch festival it used to be. The reputation it had with foreigners and non-Europeans hasn’t exactly been positive: Here’s a video regarding the 2004 contest in Athens.
http://www.youtube.com/watch?v=wP80r8b1OB4

Quotes: “My gaydar broke”
“It’s like [Idol] without the talent”