Beautiful, elegant and sparkly, Hovi Star from Israel turned it out during his first rehearsal at Eurovision 2016. His stage performance of “Made Of Stars” oozed Hovi’s signature mix of edge and class. Everything screamed “expensive”, from Hovi’s self-designed outfit to the intricate LEDs to the skin-tight and sparkling costumes worn by a pair or acrobats spinning in giant hula hoops. If you love shiny things then you’ll love Hovi’s performance.

The performance starts with Hovi standing on a black stage. A slowly brightening light catches the sequins on his outfit, which enhance the theme of stars. Constellations of faces appear beside Hovi, which mime along to the backing vocals in the first verse. Out of nowhere, two acrobats appear spinning inside a giant hula hoop that eventually lights up in a calming shade of blue. Some may consider the acrobats a distracting circus sideshow. But Hovi’s gravitas more than neutralises them. The stage continues to expand as stars fill the LED floors and walls, and they reflect off the glass on the stage. A shower of golden fireworks signals the climax of the song.

Hovi’s most flawless attribute, however, is his voice. He’s an established vocalist with great control and power. He sounded somewhat strained during his third rehearsal and struggled to reach the high notes. But we know he’ll sort this out ahead of his semi-final.

Hovi Star’s “Made of Stars”: Reviews and Reactions 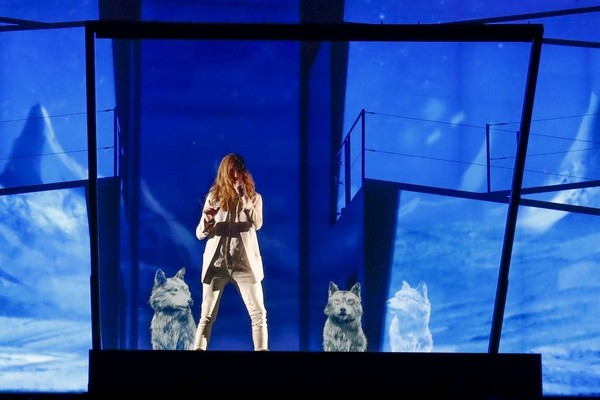 Brilliant song from Israel, again. Hovi delivers it vocally and seems connected with the song. The staging enhances the song and it deserves to finish in the top ten. My worry is that a) it is Israel and generally voters underappreciate Israeli entries and b) Hovi is a strong, far-from-the-norm character. I think it could still be a surprise non-qualifier. =(

Israel will be in the top 10 or maybe top 5 or even the winner of this year contest! The stage’s background is one of the best ever made! It remind me “Sweden 2014” preformance’s backfround but this is WAY BETTER!! <3
Great Israel! I'm really looking forward to see the 2nd rehearsal on saturday!
Flawless voice! 10000000 points..

Arlekino on the stage? Dated 200 years ago…

Hovi Star was just picked as the best act from yesterday by press! They gave him 74 points! Chapeu bas! *takes a bow*

‘Made Of Stars’ is one of my favourite songs this year. 🙂

Let it shine! Let it glitter! Let it sparkle! 🙂

Wow this rose 13 places in odds and rightfully so! The staging has totally uplifted the song!

Why people think that if Israel will win then Poland will fail or vice versa? I think they both can qualify, at the cost of some weaker songs. that would be preferable outcome

@NINA
thanks very much, yes i agree with u hovi is amazing..
hovi is my winner!!

@OR
don’t answer to all of the haters here, they not worth it.
i love hovi song , hovi is my number 1 and i will vote for him for sure.
cheers from Germany 🙂

@Bis
thanks for your compliment to Hovi …regards from israel 🙂

No. Australia had the best performance.

When I heard this song before the re-vamp, I found it absolutely dreadful. After the re-vamp it improved a little, but I still really disliked it. Now I see it as a definite qualifier. Hovi really knows how to turn stone into gold. Imagine what he could do if he had a really good song…

@Notts
This your opinion today hovi gave the best preformance and all the press said that also .. so will see … i wish micha all the luck , he is sweet men, he visited in Israel and he and hovi good friends

In my opinion Hovi might struggle to reach the final even though his song is very good.

Hovi is perfect… good day for hovi.. kisses from israel

Hovi SHOW? Ha-ha, what a show does he have? Pair of clowns? Very funny. Poland will definitely beat this. And Australia will be the winner of the 2nd semi. Hovi stays there.

@Notts
you are wrong… micha will be forgotten after hovi show…. i’m sorry because i love micha

Whose decision was it to put Hovi almost right after Michal? He’s gonna be totally overshadowed by Szpak. It’s a shame because I like “Made of Stars”

https://www.youtube.com/watch?v=BXZ3RUXnC3c
hhhhhhh hovi imitation of ira lusco 🙂
this bitch is so funny 🙂

He was so underestimated…in your face haters!

@Anton
u should be ashamed of your self…. homophobic pathetic people like u are not welcome here … so go insult some one else please looser !!
and leave hovi article please !!
i’m sure hovi will not want people like you at his article!

@gal
you should be ashamed for your self…. homophobic pathetic people like u are not welcome here … so go insult some one else plesae

@Anton
if it misrble.. why you still writing here at hovi article?
homophobic Russia has the old song i ever sound…. all the money that they invested will not help the old Russian song!!

@Rock Me
this is my opinion and i think hovi has a wining song… perfection….
thanks for your answer 🙂

I agree. Such a boring material can not be in the final. Acrobats? It’s just miserable.

@OR: this is also only your opinion lol.I respect every single opinion and I hope Hovi does well because of what he went through but I’m not a fan of the song. Not winning material for me but I’m glad You like him that much.

@Erin
Waww its amazing , thanks for the link 🙂
Hovi i love u bitch 🙂

regardless of what I think about Hovi’ song and styling choices, there is no denial he’s the biggest climber and the wildest stirrer of the day:
http://www.oddschecker.com/tv/eurovision/winner
If it means anything in the end, money will talk loud and clear.

@Tha
thanks from israel 🙂

“Let’s choose the running order so then similar songs won’t be following each other.”
Then they put Poland, Switzerland and Israel in a row.
I’m still so mad with this, 3 ballads, 2 singers with androgynous look, even I could made a better running order than that.

Hovi has great vocals btw. I’m sure he will qualify.

@ESCFAN
thanks from Israel. .. good luck also to ira 🙂

Hovi you are amazing !! If you don’t make it to the final, I don’t know who should . From Malta, give your love Ira

@Rock Me
this is only your opinion… this song is everything but boring… its a beautiful ballad with a very strong massage coming from a gay men who straggle all of his life…. so hovi is my winner!!
we all made of stars

He deserves the final but I still don’t like his song & he’s definitely not the winning entry.
Somehow idk, boring…..last year Israel was way better

@Anton
what hopped ” homophobic mama Russia ” is envy??
William – thanks for saying that hovi is the best performer today 🙂 kissess from israel 🙂

Boring! Not the final material.

I think it will make it to the final !!l and if not its not because of his song , because he has amazing song and vocal and performance its from other reasons……………… like in most cases that Israel isn’t qualified !!

Agreed. This ‘Pimp’ looks conceited as a barber’s cat…We are one, we are heroes, we are unstoppable and we are all made of stars. ‘Bitches’ wanna move on!

Just take a look at the bookies right now. They are going wild with the Israeli song- it jumped from 26th place to the top 10… Amazing impact for Hovi’s 1st rehearsal. Good job!

Hovi together with his powerful voice can lift this strong ballad song to high position, winner? No body knows who will win as winning is not guaranteed but this song is serious contender even though it’s underrate, we know conchita was underrated in 2014 but Austria won

It will not make the Final.

@Rubén
thanks from israel 🙂

Probably one of the biggest improvements in terms of a song adquiring a new dimension with a proper staging.