Tonight is not just the night four national selections will be aired. It is also the night that four countries will actually seal the deal and choose their representatives at the Eurovision Song Contest 2017. Those are Lithuania, Sweden, Iceland and Norway. We’ll have four shows and four winners. Welcome to the Super Saturday Part V!

Tonight Lithuania closes down its extensive search for the winner of Eurovizijos atranka 2017, who will have the honour to represent this Baltic country at the Eurovision Song Contest 2017. We started with 51 songs. Now we’re down to seven, but only one can take the crown.

The winner will be decided by a combination jury votes — which in turn will be a combination of Lithuanian and international juries — and by the audience. Though the broadcaster is said to be changing the voting system in order to make the show more exciting and to increase “transparency”.

According to both our jury and our readers, Greta Zazza should win Eurovizijos atranka 2017.

The six-time Eurovision winner and the host of the last year’s contest — Sweden — chooses its ambassador for Kyiv tonight. Twelve acts, which have qualified from the four semifinals and Andra Chansen round, will compete for the ticket to the Ukrainian capital.

The decision on who will take the trophy will be made up by the international juries – this year from Armenia, Australia, the United Kingdom, France, Israel, Italy, Malta, Norway, Poland, Czech Republic and Ukraine – and by public televote. Iveta Mukuchyan will present the Armenian votes.

Wiktoria is the odds-on favourite to win Melodifestivalen 2017. However, according to our jury, it is Mariette. Meanwhile, according to your votes, the favourites are Jon Henrik Fjällgren and Aninia.

The land of ice and fire also picks its representative at the Eurovision Song Contest 2017 tonight. Seven acts — six qualifiers from the semifinals and one wild card entrant — are in for the win. In the semi-finals, all entries were required to be performed in Icelandic; however, in the final the entries are required to be presented in the language they would compete at Eurovision.

The winner will be determined by both jury and public televote through two rounds of voting. Five acts will be eliminated in the first round. The top two will proceed to the superfinal, where the winner will be decided by public vote alone.

According to your votes, Svala Björgvinsdóttir is the main favourite to win Söngvakeppnin 2017.

Norway is yet another Nordic country that will pick their national representative tonight. Ten acts, which were selected by the national broadcaster NRK, will compete for the chance to wave the flag for Norway in Kyiv.

The winner will be determined through a combination of votes by the international jury – this year consisting of Armenia, Austria, Finland, Germany, Hungary, Ireland, Israel, Malta, Sweden and the United Kingdom – and by public televote.

Ulrikke is both our readers’ and our jury’s main favourite for the victory.

And if that’s not all, tonight the BBC will also reveal the revamped version of Lucie Jones’ song “I’ll Never Give Up On You”. The song and its music video will be debuted on BBC iPlayer at 20:00 CET (19:00 GMT), but will also be available on the official Eurovision YouTube channel one hour later.

How will you spend your Super Saturday? Who are your favourites to win each national selection? Sound off in our comments section below! 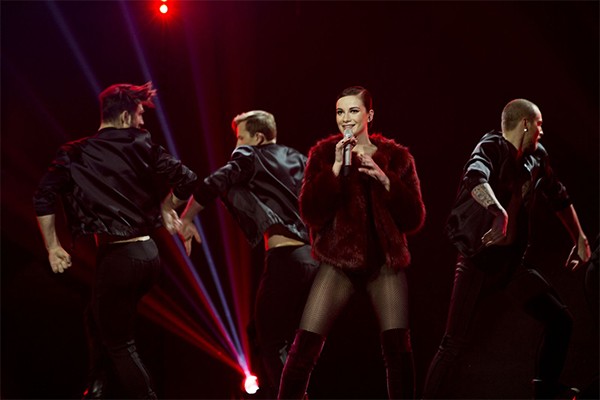 Terrible disision from Lithuania if we do Qualify its not because of the song its because the song is in Kiev ????????????????
Same on you PS I’m lithuanian

Guys is it only me or Wictoria cant sing at all? I cant stand her voice at high notes. She screams like a dying panda. Her song was best one but her performance screwed it. She cant control her breathing and missed some notes. Is it only me or anyone else noticed it?Please answer me i am going nuts…

The finals in Norway and Iceland are not available abroad! :((((((

Looks like that YouTube video was some kind of elaborate ruse. It has been taken down now. Apologies – it wasn’t my doing.
SVT stream is perfect as usual. 🙂

You did not mention it’s National Independence day in Lithuania, that is why anthem was sung and there is more attention to national heritage 🙂

It looks like Sweden have just initiated a live stream on YouTube.
Here is the link: https://www.youtube.com/watch?v=1QfywfNyeRI

Wow, what a night!!! I really hope Svala, Robin / Mariette and Elin & The Woods win!

Wow! Lucie Jones’ team has told the BBC how to do a re-vamp. I’m astonished! UK might actually do better for a change – oh the political irony! 😀

I do get the feeling that more countries are leaving their reveal to the last moment. Nevertheless I’m really grateful for all those valuable links. It would have been unthinkable to have access to all these shows when I first started watching Eurovision.

Bad and unnecessary clash of the Norway and Sweden finals. NRK will lose out this year. Don’t do it again.

I’m not sure if I wanna hear revamped Lucie’s song. She worked amazingly with her song alone, enough to stay classy…

Hoping for Greta in Lithuania, Mariette/Robin in Sweden, Aron Hannes/Brink in Iceland and Ulrikke in Norway. Also I’m looking forward to my country (UK) revealing the revamp!

I hope Wiktoria will win. The song is surprisely good, even if I’m not a fan of the genre.

I don’t think this link to NRK will work overseas, but I think NRK will post a link at its homepage when it’s time.

Queen Svala will win Söngvakeppnin tonight! She got the voice, the look and the performance 🙂 Here is her official video for Paper https://youtu.be/9CHsdrtqSqw Go Iceland!

Azerbaijan’s entry has just been released and it joins the trend of the promising recent additions (Belgium, FYRoM).

And Serbia as well. At least that’s what I read in the comments on the instrumental snippet. So that’s either 5 or 6 brand new songs, plus the British revamp. I wonder when Albania and Italy plan on revealing their revamped songs? And Russia, San Marino, and Bulgaria should hurry up as well. I’m not sure if Russia want even more controversy, a big fine, and a possible temporary ban from the contest by deciding not to participate this late. Anyway, I hope tonight’s winners will be Jon Henrik & Aninia/Mariette, Ammunition, Greta/Aiste, and Svala.

Azerbaijan and Serbia will also present their songs.

Seriously gunning for Svala and Ulrikke. If they win, coupled with Belgium and Macedonia this will turn out to be my favourite Eurovision ever!

Hoping for Jon Henrik & Aninia or Mariette for Sweden