The 25 year old singer will get her shot at Eurovision glory, having twice tried to represent the country before. We also know the name of her entry: “Crazy”!

The song is set to be released in the coming weeks. On the Eurosong website, Franka explains her long-time love of Eurovision: at two years old, she was singing along to Croatia’s 1994 entry, Tony Cetinski’s “Nek ti bude ljubav sva”. Young and talented, y’all!

A place at Eurovision 2018 would mark an incredible comeback year for Franka Batelic. At just 16 years old, Franka made her name winning the talent show Showtime in 2007. Amongst the judges of that contest was none other than Jacques Houdek.

Franka regularly released singles throughout the rest of the decade, including her attempts at Dora. Also in 2009, Franka won Ples sa zvijezdama, Croatia’s version of Dancing With the Stars.

But up until 2017, Franka seemed to have left the music industry. She’s come back in style though with her latest single, “S tobom“. The track charted at #3 in Croatia and has put her right back in the spotlight.

What do you think of Croatia’s selection? Do you think that Franka can bring Croatia to the final for the third year in a row? Let us know all your thoughts in the comments section below. Poll: Who should win the second semi-final of Estonia’s Eesti Laul 2018? 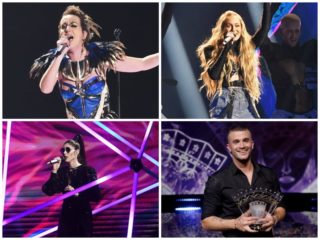 If her song can bring the same style and vocals as in “S tobom”, she has a good shot to at least get in the upper half — but it’ll take something truly special for higher — bring on the song!

Not thrilled, but let’s see… ?

I hope she has a good song, Good luck Croatia. :3

Very nice choice, hope they have a good song for her..

During today’s radio interview Franka said she will present her song Crazy on February 26th. Also, she added people will love or hate her entry, there won’t be golden mean.

I hope its something as good as Lighthouse.

https://dnevnik.hr/showbuzz/celebrity/franka-batelic-progovorila-o-eurosongu-i-prisjetila-se-snimki-s-pocetka-karijere—506662.html You can see a snippet of her video for 5 sec

Welcome to the contest Franka! Make us proud! Keep our good songs streak.

That would be nice but I doubt it because it’s Croatia afterall and obv we haven’t heared the song yet, but it’s fun to specualte. 🙂

well, I am sure moldovians also thought the same as you last year “Moldova can’t make it to the Top 3 bcuz it’s Moldova”. It’s a song contest, if you deserve it you’ll get it.

Well, that’s kinnda true, but you also have to take in the fact that epic sax guy was an internet sensation himself for many years which contributed a lot to the overall success of that entry.
There’s also no desire in Croatia to win and host the contest, for expl when Nina Kraljic (2016) broke into the bookies top5, cro delegation immediately staged down the act and afterall left the poor girl miserable after the event.
I hope the same won’t happen to Franka.

Good choice. She is an excellent singer. And nice with an uptempo entry from Croatia, been a white since. Think she will continue Croatia’s good streak

Good luck to Croatia ! Can’t wait to hear the song

Great choice!! Hopefully, she will bring a TOP 10 place to Croatia.

Btw, any news on the Bulgarian selection process? Is the chance that it’s going to be Poli Genova still high? Or will it be Kristian Kostov?

I hope it will be dance track similar to “On fire”

Such an uninteresting choice.

People (including me) said the same about Blanche, and look what happened there. You can never write someone off before you hear their song.

Of course I can, since she has a charisma of an average goat. But I agree, that we should wait and hear the song, because it might surprise, although the title screams trash and this situation was exactly the same with Blanche, and she had a great song, but anything else was terrible.

Because Alexander Rybak (threw a hissy fit when MILKI didn’t win in Belarus), Salvador (openly disparaged all the other songs in the contest) & Marija Serifovic (supported an extreme nationalist party which regards murderers like Ratko Mladic as war heroes) were all so charismatic.

Ugh. Shame on her.

pff… Cut the negativity for God’s sake. What matters is the song and we haven’t heard it yet.

Well done Croatia!
Every year better and better.
Her voice is amazing, I hope she will have the song that will do justice to it too. I wish her all the best!

Exactly! Croatia has been climbing the scoreboard for last 2 years. Now it is time for TOP 10! New Cro delegation is doing great job. 🙂

YAAASSSS! Franka, Aisel and Eleni will bring us the bops that we need. A true trinity. Thank you, Croatia.

We have miss of Eurovision 2018.
And I hope so the winner to.

This is so promising, we are definitely gonna have an amazing year. I am also very happy that Croatia chose an act that definitely will be friendly and accessible! I am very happy for them.