Three acts have already progressed to the grand final of Iceland’s Söngvakeppnin 2018 which will take place on Saturday 3 March. Tonight in the second semi-final, six more acts battle for the final three spots in the grand final.

Last week, the Wiwi Jury correctly predicted two of the three songs that would get through to the grand final. While the Wiwi Jury’s opinions varied from those of our readers, we were in agreement that Fókus Hópurinn was the best act of the first semi-final.

This week, Aron Hannes topped the Wiwi Jury’s rankings with his song “Gold Digger”. He will perform “Golddigger” — the Icelandic version of his song — this week, vying for a spot in the grand final.

The Wiwi Jury ranked Þórir Geir Guðmundsson & Gyða Margrét Kristjánsdóttir and Dagur Sigurðarson second and third respectively. According to the Wiwi Jury, these are the three acts that should progress to the Grand Final.

The best: Oh look! A Söngvakeppnin entry that is lively and actually feels current-ish! I can’t help wonder how much “gold” a young guy like Aron has to be dug. But perhaps it’s just a metaphor for the huge burden of having a girlfriend who expects him to pay for her McDonald’s. This song isn’t perfect, but it’s the best of the 2018 lineup. There’s potential for a fun national final performance, which should add even more. (Robyn, 10/10)

The worst: I can see why this would appeal to some people and why it would be a popular choice for Iceland. Personally, I find the entire thing a tad annoying. The rap section lacks the finesse and execution I’d want to see from a Eurovision rap. The lyrics are really unappealing too. I feel like he’s a poor man’s Mikolas Josef — and if Iceland chooses this, he’s competing in the same half of the same semi-final as the Czech Republic. It’s not going to end well. (Antranig, 4/10)

The best: A chilly duet this time, which is a perfect song for singing at a campfire or around the holiday season. A decent effort. (Barnabas, 7/10)

The worst: A chirpy guitar, some drum beats, chords, and a girl and guy sing a lot of romantic words that rhyme a lot (strange/rearrange, lol) – that’s basically this song. It’s only really remotely interesting once the harmonica comes in, and even then it’s impossible to remember anything creative after it’s over. The title isn’t even memorable. I guess it’s charming and sweet, but really can anyone imagine this doing well in an international competition? (Natalie, 3.5/10)

The best: In a year when Söngvakeppnin is turning into a relaxation tape, Dagur stands out as one of the more commanding singers. He has a loud, rich voice. And while it’s perhaps best suited to musical theatre, at least “Saviours” plays to his strengths and isn’t trying to be a trendy pop song. Dagur at least deserves a place in the national final, if only for the emotion and energy he puts in his performance. (Robyn, 7.5/10)

The worst: This one is really frustrating. I was waiting for such a long time for this song to go anywhere. It’s like a reaaaally slow build-up to a tiny hill. Even those pounding snares in the background and jarring violins don’t offer much. Towards the end, I can feel all the different elements struggling to be really dramatic, but I just didn’t feel it. Dagur tries too to no success. I wish I liked this more than I do, but it just isn’t doing it for me. (Natalie, 3.5/10)

The best: “Here For You” is one of the more interesting songs in the line-up. It’s got a fast-paced electronic beat that keeps you engaged throughout, yet also has a laid-back quality about it, so it doesn’t feel too busy overall. But, it is slightly monotonous and doesn’t have the peaks and troughs to make it a standout. Additionally, we’ve heard a few similarly-styled songs in previous Icelandic selections and they never come off particularly well live. But if Sonja and Egill manage to build some chemistry between them, then it may have a shot at reaching the Söngvakeppnin final at least. (Jonathan, 6.5/10)

The worst: The song starts interesting, but when they start singing it starts to disappoint. This feels like another cliché love song that we already have heard a million times before. I’m not a fan of it and I’m also afraid that it won’t do really well in Europe. I can’t enjoy listening to these voices either. The girl also seems to not have a really powerful voice, so I wonder how they will do on stage. When it comes to the Eurovision Song Contest I mostly prefer the live versions the studio versions so maybe their act can make me change my mind. (Aline, 3/10)

The best: I am ready for these three disco mammas. The verses of “Heart Attack” are deceptively uneventful, but when the chorus hits, it all pays off. Those vocals take the songs into a heavenly disco realm and there’s the potential for a polite discostravaganza. The big question is why the song is called “Heart Attack” when it’s all about getting goosebumps. (Robyn, 7/10)

The worst: The backing beat that runs throughout this song is really annoying. It has the potential to be a Melfest-esque schlager entry but as it plays, it becomes evident that it lacks the quality. I think these ladies will bring a great live performance but ultimately great staging can only do so much for a mediocre song. I’m feeling less heart attack and more gastrointestinal discomfort. (Antranig, 3/10)

The best: Cuteness and gentleness are taken to new dimensions here, the guitar and strings work very well together, and just leave me being unable to say more but that even though “My Wish” probably won’t win the competition, it will touch many hearts. (Barnabas, 7.5/10)

The worst: Good news, y’all: another Disney-esque ballad! Iceland has been here, done that on so many occasions before, and they’ve never worked. What’s worse is that “My Wish” is even more saccharine than all those that have come before it. In fact, one word sums this up: boring. (Chris, 3/10)

The six acts will all perform the Icelandic versions of their songs in tonight’s semi-final. If they make it through to the grand final, they will then perform the version of their song intended for Eurovision.

What do you think of these six semi-finalists? Who should make it through to the grand final on March 3? Let us know in the comments below! 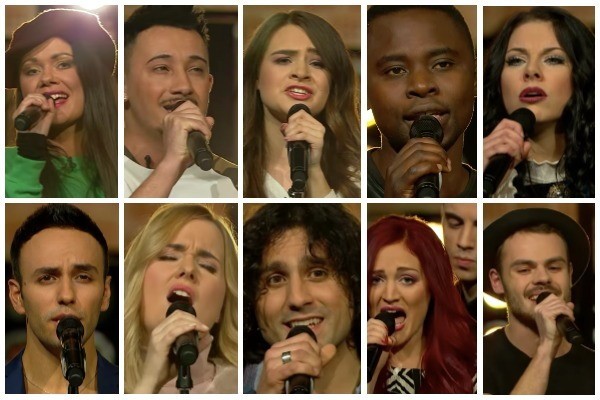 Well… If this song wins (which as we all know will probably be the case), aron will have to face Czech republic in the same semi and Mikolas’ song is so much stronger than Aron’s…

Disgusting. I hope he gets selected so that Iceland and the Czech Republic cancel each other out and miss the final.

Honestly, “My Wish” is my favorite from this Semi. It’s sweet and sounds like a Christmas song.

Exactly how I feel. Rakel should qualify, her song actually evokes real emotions.

Can someone write down all the national finals and semi finals which will be held tonight?