Eurovision fans with mutliple computers will need to put all of them to use tonight. That’s because it’s Super Saturday! Tonight Switzerland and Finland will stage their national finals, while Sweden, Iceland, Hungary, Latvia and Lithuania will stage semi-finals and other preliminary rounds. That’s a lot to keep straight, so we’ve compiled all the links and background you’ll need to cope with the 55 acts performing tonight. Grab your painkillers and your notepads. Super Saturday is finally here! What: The national final of Uuden Musiikin Kilpailu (UMK 2014)

When: Finish broadcaster YLE will provide a live stream from 20:00 CET on the YLE web site. If that’s streaming slowly, you can also watch the show via the Eurovision.tv web player. The broadcast begins with YLE’s pre-show UMK +/-. The actual contest starts at 20:30 CET.

Format: Eight finalists will compete for the ticket to Copenhagen. The winner will be determined by a 50% jury, 50% televoter split.

What we have to say: The #umk14 broadcasts started on December 26 with 12 acts. All these weeks later Finland has only eliminated four acts. That is a lot of build-up! We were gutted when early fan favourite Jasmin Michaela was eliminated. Mikko Pohjola has a lot of love on our site. He won first place in our fan poll, and he also finished first with the Wiwi Jury—our in-house panel of musical unprofessionals. He’s also done well during his dress rehearsal, according to our blogger who is on-the-scene.

This is how we ranked this year’s finalists (out of 10).

You can read all of our Finland coverage by clicking here. What: The national final Die Entscheidungsshow (The Decision Show)

When: Swiss broadcaster SRF will provide a live stream from 20:10 CET. It will be available on the Eurovision.tv web player.

Format: Six finalists will compete to represent the country at Eurovision. A jury will determine 50% of the final score, while televoters will account for the remaining 50%

What we have to say: We were not impressed with the final selection of songs. However, one singer—Sebalter—really stood out. He finished in first place with our jury, with one juror saying that his song “is perfect—and perfect for Eurovision.” In our fan poll, Sebalter finished second. He lost out to Nino Colonna, a bald haidresser.

Here’s how we rated the finalists. Scores are out of 10.

You can read all of our Switzerland coverage by clicking here. What: The first semi-final

Where and when: The broadcast starts at 20:00 CET on SVT Play.

Format: Eight acts will compete. Two will advance direct to the final in the Friends Arena. Two acts will be relegated to the Andra Chansen (Second Chance) round. The other four acts will be sent packing.

What we have to say: The bookies see this as a two-horse race with YOHIO and Helena Paparizou trotting past the rest of the field (and kicking a bit of dirt in their face). YOHIO, who rose to prominence during last year’s Melodifestivalen, is back with a more mainstream song. Helena, who won Eurovision for Greece back in 2005, has had to overcome criticism ahead of tonight’s show. One Greek pop star said it wasn’t right of her to try to sing for Sweden. #jealousabit?

For more information, you can read our impressions and see photos of the first rehearsals and second rehearsals, check out our review of the one-minute snippets, and see the betting odds.

You can read all of our Sweden coverage by clicking here. What: The first heat of Söngvakeppnin 2014

Where and when: RUV will broadcast the show from 20:45 CET on the RUV web player.

Format: Five acts will compete for two spots in the final. Televoters have complete control, as there is no jury tonight.

What we have to say: This semi-final showcases the diversity of music in Iceland and will feature both opera and dance music. You can listen to the five songs by clicking here.

You can follow all of our Iceland coverage by clicking here.

Where and when: You can watch the show via the the MTV web site from 20:20 CET.

What we have to say: Last week’s show was pretty stellar. Among the qualifiers was Viktor Király, who recently collaborated with American rapper DMC. Controversy was brewing earlier in the week when a Hungarian magazine reported that fan favourite András Kállay-Saunders might face elimination over ongoing court proceedings. Fortunately he kept his chin up, spoke with us on his birthday, and remains in contention with his powerful song “Running”, which explores themes of child abuse.

You can follow all of our Hungary coverage by clicking here.

What: The first semi-final of Dziesma 2014

Where and when: You can watch the show on LTV from 20:25 CET

Format: 12 artists will compete for 6 spots in the final. LTV will use a jury-televote split.

What we have to say: Last year’s runner-up Samanta Tina is back and she’s hungry for a victory. She kindly spoke with us earlier this week. She has a special message for our readers: “Believe in yourself, fight for yourself, cause every one of you is unique, and our earth is proud for your believe and your fight!” Amen!

For the first time ever, viewers in other countries will be able to vote for their favourites online. These votes will be included in the televoting score.

You can follow all of our Latvia coverage by clicking here. Where and when: You can watch the show on the LRT web site from 20:00 CET

Format: Six acts remain. The format has been incredibly complicated, so you’ll need to consult our separate guide for the details.

What we have to say: This national selection has been a ratings success. We take this as proof that Lithuanians like to watch a good train wreck!

You can read all of our Lithuania coverage by clicking here.

So we said there are seven selections tonight and that’s still true. But there is also an eighth going on this morning in Moldova. Earlier this week TRM admitted that mistakes had been made in its selection process, so it is now staging live auditions featuring all 61 hopefuls. It starts at 10:00am CET and you can watch it here.

Which contest are you watching tonight? And which contest will you switch to after your first one is over? 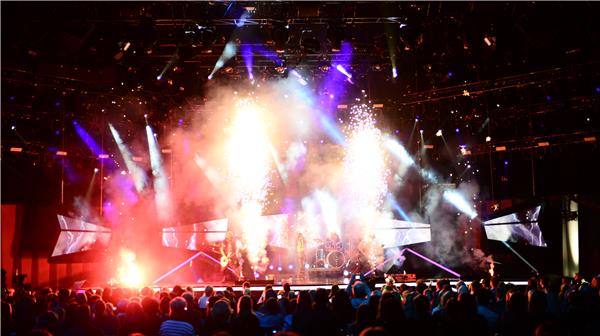 Melodifestivalen: Listen to the studio versions of tonight’s songs

For Söngvakeppni Sjónvarpsins, there are actually TWO finalists, not three as reported earlier. My apologies for the wrong information 🙁 Wont happen again.

If Latvia ends up sending “Cake to Bake” to Copenhagen, we’ll officially have a running Cake theme.
Hopefully I’m going to watch both melfest and A Dal. My Magyar favorites are “We All”, “Waterfall” and “Running.” For Melfest, I’m hoping for Yohio straight to the final. Very excited! I love Super Saturday!

Yaa……… I slept through Moldova too lol unless it’s still happening..

Sweden: Finally, it’s that time of the year again: Melodifestivalen 2014 will start tonight! It promises to be a very strong year for the Swedish national final with many big names. And the first heat seems an instant hit. Strong semi-final without bad songs. Talk about a smashing opening. I hope: To the final: – Ellen Benediktson – Songbird (What a beautiful song and what an amazing voice. The song has some similarities to the wonderful “Porslin” by Anna Järvinen from last year. I hope Ellen obtains a much better result because she deserves it.) – Helena Paparizou – Survivor… Read more »

Finland: Just like last year a strong final with 6 very good song. My favorites for tonight: – Clarissa feat Josh – Top of the world (Very strong and catchy song. It has hit written all over it. It would make the perfect entry for Finland.) – Hanna Sky – Hope (Very good song with a universal theme.) – Hukka ja Mama – Selja – Lauri Mikkola – Going down (Strong and good sung ballad.) – Madcaft – Shining bright (Normally not really my style, but I think it’s a fun song.) – Mikko Pohjola – Sängyn reunalla One of… Read more »

i will definitely be watching die große entscheidungsshow in swiss. all songs are so good and mature, i guess mature is THE word most people on wiwibloggs don’t like. no offence lol

I think this semi-final is stronger than the one from last week. But I hope for a much better outcome this week. Last week I disagreed with all the finalists of the televoters.

This are my favorites for tonight:

“Running” by Kállay Saunders is a good song but too much overrated imo.

And once again it’s crystal clear that we can always count on Iceland for quality entries. Again a very strong semi-final. I like 4 out of 5 songs very much en they all can go to the final if it was up to me. “Von” by Gissur Páll Gissurarson is my absolute favorite this week. Such an amazing ballad that gives me goosebumps. On the other hand I absolutely detest “Amor” by Ásdís María Viðarsdóttir. It’s such an annoying and irritating song. I hope it comes last.

Latvia: As usual a weak semi-final in Latvia. There are only four songs that I really like. This are my favorites for tonight: – Aarzemnieki – Cake to bake (Such a sweet, fun, catchy and happy song.) – Niko – Here I am again (Very good and energetic song. Even better than his entry from last year.) – Olga & L?go – Saule riet (Nice song that resembles “Wake me up” by Avicii.) – Samanta Tina – Stay (Strong song by a good singer who should’ve represented Latvia last year with the beautiful song “I need a hero” instead of… Read more »

Switzerland: Switzerland has always been one of my favorite participating countries in Eurovision. I like / love a lot of their entries but I think it’s better from next year on to select their entries internally. This final is not exactly of a high level, but it isn’t as bad as some might say. However, there are only 2 songs above the rest: Yasmina Hunzinger – I still believe (A very beautiful and convincing ballad.) 3 For All – Together forever (An enormously catchy and happy song. It sounds as if this could be a Romanian entry. It is the… Read more »

The stream for the Moldova auditions is:
http://www.ustream.tv/channel/moldova-unu

I’m watching Melfest, of course. I may have Moldova’s maniacal live audition show in the background 😉

I might also tune into the Swiss national final to see 3ForAll perform or something. Not sure. And maybe Hungary. Whatever the case, definitely not Lithuania’s, haha.

Gonna watch UMK for sure! I’ve been following for the last few weeks.

Also, why does everything have to be at the same time? I want to watch MelFest too.

It’s the bet day of the year: Super Saturday! I’m starting with A Dal, and then switching to melfest. I cannot wait to hear YOHIO’s song and to see Bogi and Joni perform live.

Wow D, you’re really on top of those semi finals. I love Elisa too 😀 & from Hungary András!!!

btw the Hungarian heat won’t be streaming on Eurovision tv. It is only the final on Feb 22nd.

And also, the Moldovan audience show begins at 11am CET here: http://www.trm.md/ro/tv-on-line/

After committing 3 weeks to UMK, I’m gonna have to switch to Melfest. I have a craving for a lil spectacle.

Willy Lee Adams – Haha yeah, Elisa’s song is actually the only one I’d listen to in my free time out of semi-final one. Don’t know why, but I really like it 😛