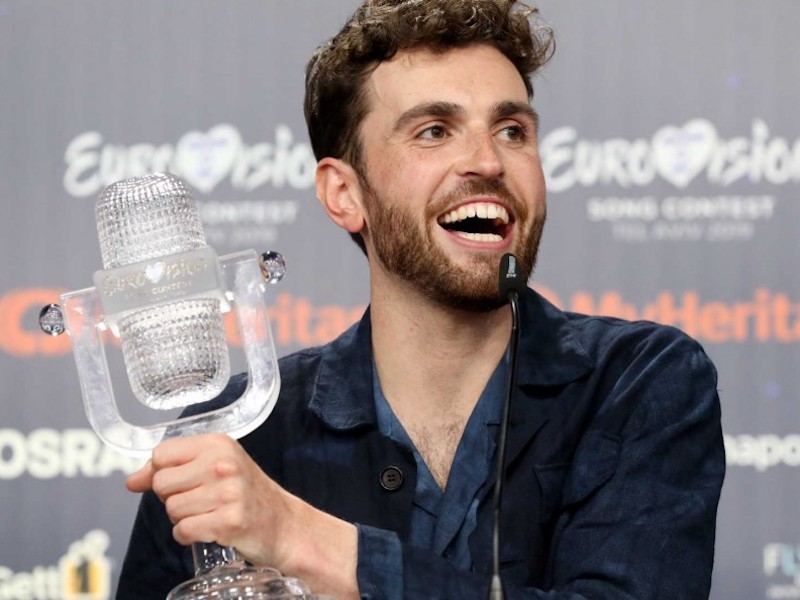 Following the cancellation of Eurovision 2020 due to coronavirus precautions, it is expected that the next edition of the Eurovision Song Contest will take place in 2021.

This follows the last edition of the song contest, held in Tel Aviv in 2019. This contest was won by the Netherlands’ act Duncan Laurence with his song “Arcade”. Duncan gave the Netherlands their fifth Eurovision victory.

Where is Eurovision 2021 being held?

The EBU is sticking with the same host city and venue that were selected for 2020. Eurovision 2021 will be hosted in the Dutch city of Rotterdam in Ahoy Arena.

When will Eurovision 2021 be held?

Who are the hosts of Eurovision 2021?

The shows will be hosted by Dutch stars Chantal Janzen, Jan Smit, Edsilia Rombley and NikkieTutorials.

What is the logo and slogan of Eurovision 2021?

The 2020 logo has been revamped into a new concept for 2021. The logo is based around the geographic location of the capital cities of the participating countries, centred around Rotterdam.

Like the 2020 logo, the countries are represented by colours included in the flags of each country.

Florian Weider’s stage design from 2020 has been adapted for the 2021 show.

What are the semi-final allocations?

As the same countries are competing in 2021, the EBU has chosen to keep the same semi-final allocations as 2020. The running order, however, is different and is based on the 2021 songs and staging requirements.

What changes are being made to the Eurovision rules?

For Eurovision 2021, acts may use pre-recorded backing vocals. The EBU says this is a one-year trial for 2021, and is being done to help keep delegation numbers down.

Will the coronavirus Covid-19 affect Eurovision 2021?

Organisers have come up with four different scenarios to ensure that Eurovision 2021 will go ahead regardless of the Covid-19 pandemic. The shows will use a reduced audience of 3500, fully seated.

As a precaution, the EBU is requiring that all delegations record an “as live” performance of their entry. This will serve as a backup if, come May, the delegation is unable to travel to Rotterdam or is required to quarantine.

Which countries are doing Eurovision 2021?

The EBU has confirmed that 39 countries will participate in Eurovision 2021. All 39 performers have been selected and 39 songs have been released.

After winning Festivali i Këngës 59, Anxhela Peristeri will represent Albania at Eurovision 2021. She will perform her winning song “Karma”. The FiK version has been revamped for Eurovision.

Broadcaster SBS has internally selected Montaigne as Australia’s artist for 2021. She will perform her internally selected song “Technicolour”. Due to the pandemic, the Australian delegation will not travel to Rotterdam and will instead compete with their live-on-tape performance.

Following an agreement between Belgium’s two Eurovision broadcasters VRT and RTBF, Hooverphonic will return as the Belgian act for Eurovision 2021. Along with returning vocalist Geike Arnaert, the group will perform their song “The Wrong Place”.

🇧🇬 Bulgaria: VICTORIA – “Growing Up is Getting Old”

Bulgaria’s 2020 act Victoria Georgieva — who performs as VICTORIA — has returned for 2021. She will perform her internally selected entry “Growing Up Is Getting Old”.

Croatia will be represented by Albina Grčić, who won the Croatian national final Dora from a field of 14 acts. Albina will compete with the song “Tick-Tock”.

Broadcaster Česká Televize has internally selected Benny Cristo for the next edition of Eurovision. The popular singer — who also performs under his full name Ben Cristovao — had previously won the national final ESCZ 2020. He will sing the song “Omaga”.

For the second year in a row, Uku Suviste has won Estonia’s national final Eesti Laul and will represent Estonia at Eurovision. His song for Rotterdam is “The Lucky One”.

Tornike Kipiani will represent Georgia at the next edition of Eurovision. He was originally selected by winning the 2019 series of Georgian Idol. Tornike’s song for Rotterdam is called “You” and it will be released later in March.

The German broadcasters ARD and NDR have internally selected the upcoming German singer Jendrik Sigwart. He will perform his song “I Don’t Feel Hate” at Eurovision.

The Greek-Dutch singer Stefania Liberakakis has been internally selected to represent Greece at Eurovision. She will sing “Last Dance”.

Broadcaster RÚV has invited back Söngvakeppnin 2020 winner Daði Freyr and his group Gagnamagnið. His internally selected song is called “10 Years”.

Israel’s broadcaster KAN has invited back Eden Alene as Israel’s act for Eurovision 2021. Eden will sing “Set Me Free”, which was selected in a three-song national final.

Broadcaster LTV has invited back Supernova 2020 winner Samanta Tīna to represent Latvia at Eurovision 2021. She will sing “The Moon Is Rising”.

Lithuanian band THE ROOP will represent their country with “Discoteque” after winning the national final  Pabandom iš Naujo! 2021.

2020 national final winner Natalia Gordienko will return in 2021. She will perform the song “Sugar”.

🇳🇱 The Netherlands: Jeangu Macrooy – “Birth of a New Age”

Dutch broadcaster AVROTROS says they are “happy to continue the collaboration” with Jeangu Macrooy. The Suriname singer had previously been internally selected to represent the Netherlands in 2020. He will perform the song “Birth of a New Age”.

North Macedonian broadcaster MKRTV has internally selected Vasil Garvanliev to represent the country at Eurovision 2021, having previously being selected in 2020. He will perform the song “Here I Stand”.

🇵🇹 Portugal: The Black Mamba – “Love Is on My Side”

The Portuguese group The Black Mamba will represent Portugal with their English-language song “Love Is on My Side”. The Black Mamba won Festival da Canção 2021 from a field of ten grand finalists.

Broadcaster Channel One — one of Russia’s two Eurovision broadcasters — is again organising Russia’s entry for Eurovision 2021. Manizha will represent Russia with “Russian Woman”, after winning a hastily organised national final.

The Italian singer Senhit will again represent San Marino at Eurovision. She previously competed at Eurovision 2011 and was due to return in 2020. She will sing “Adrenalina”, with the American rapper Flo Rida featuring on the studio version of the song.

Spanish broadcaster RTVE has invited back Blas Cantó to be Spain’s act in the next edition of Eurovision. He will sing the ballad “Voy a quedarme”, selected from a two-song national final Destino Eurovision.

The singer Tusse Chiza will represent Sweden after winning the national final Melodifestivalen 2021. He will perform the song “Voices”.

Gjon Muharremaj — who performs as Gjon’s Tears — will again represent Switzerland at Eurovision 2021. He will perform the internally selected song “Tout l’univers”.

Electro-folk group Go_A were internally selected by broadcaster UA:PBC, after having previously won the 2020 national final. They will perform the song “SHUM” at Eurovision 2021, with the song selected by an expert jury. The song has been revamped into a new version for Eurovision.

The BBC has internally selected the singer-songwriter James Newman who was also due to represent the UK in 2020. His song for Eurovision 2021 — which he has co-written — is “Embers”

🇦🇩 Andorra: Broadcaster RTVA will not return to Eurovision, following a decision made by the Andorran government.

🇦🇲 Armenia: After previously confirming, broadcaster AMPTV later withdrew from Eurovision 2021 citing “the latest events, the shortness of production time as well as other objective reasons”.

🔴 Belarus: The EBU did not accept either of the two songs submitted by broadcaster BTRC as they were found to be in breach of contest rules. The EBU wrote, “As BTRC have failed to submit an eligible entry within the extended deadline, regrettably, Belarus will not be participating in the 65th Eurovision Song Contest in May.”

🇲🇪 Bosnia and Herzegovina: Broadcaster BHRT  will not return to Eurovision in 2021 due to ongoing financial issues.

🇭🇺Hungary: Broadcaster MTVA will hold its song contest A Dal in 2021, however it will again not be used as a Eurovision national final.

🇲🇨 Monaco: Broadcaster TMC has confirmed that Monaco will not return to Eurovision in 2021.

🇲🇪 Montenegro: Broadcaster RTCG has confirmed that Montenegro will not return to Eurovision in 2021. The broadcaster did not give a reason for their decision.

🇸🇰 Slovakia: Broadcaster RTVS has confirmed that Slovakia will not be returning to Eurovision in 2021, however they have not ruled out “future cooperation”.

Associate members of the EBU

🇰🇿 Kazakhstan: While Kazakhstan broadcaster Khabar Agency competes at Junior Eurovision via a special invitation, the EBU says it has “no plans” to extend the invitation to Eurovision 2021.

Non-members of the EBU

🇽🇰 Kosovo: Broadcaster RTK does not currently meet membership criteria for joining the European Broadcasting Union. As a non-member, they are unable to compete at Eurovision. The EBU has also confirmed they have “no plans” to give Kosovo a special invitation to compete.

🇱🇮 Liechtenstein: The microstate has confirmed that it has no plans to join the EBU and participate at Eurovision. The small broadcaster 1FL TV has cited the associated costs as the reason for not joining.